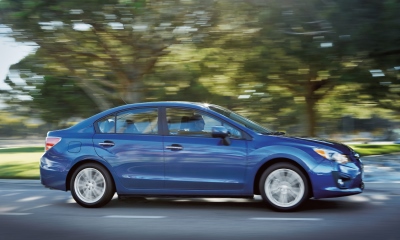 Source: courtesy of Subaru
Subaru sales rose 21.2% in March to 44,479. And its share of U.S. car sales surged to 2.9%. However, the best measure of its sales superiority is how hard it is to get one.

New research from Edmunds shows that Subaru dealers only had a 25-day supply, called “days to turn,” of the cars in March. That compares to an industry average of closer to 40 days. At the other end of the spectrum, Honda dealers’ supply was 65 days last month. Honda sales fell 2% in March to 133,318.

The auto industry uses “days to turn” as a critical measure of demand. The definition of the term is the “average number of days vehicles were in dealer inventory before being sold during the months indicated.” The most recent month for the measure was March.

Interestingly, the only other car makes with low days to turn were three luxury imports — Mercedes, Toyota Motor Corp.’s (NYSE: TM) high-end Lexus and Volkswagen’s Audi. The prices of these cars are often well above $50,000. A typical Subaru has a sticker price closer to $25,000.

Subaru has several advantages that push it to the top of the low inventory list. It was rated well above average in the recently released J.D. Power 2014 U.S. Vehicle Dependability Study. As a matter of fact, it matched BMW’s score.

Another advantage Subaru has is a broad lineup of four-wheel drive cars. It markets eight basic models, which include sedans, coups, SUVs and crossovers. It is particularly strong in the low-priced, high gas mileage portion of the market. Prices for its Impreza start at $17,895, for a car that gets 36 mpg for highway driving.

Subaru’s sales in the United States remain relatively small. Nissan and Honda each sold more than 130,000 vehicles last month. The gulf between Subaru and these other brands will continue to close, if its sales continue to surge more than 20% a month. No other car company of any size in the American market can boast anywhere near that kind of growth. Subaru’s only challenge may be to keep enough cars at its dealerships to meet demand.