Why Chrysler’s Ram Is Outpacing Ford and GM 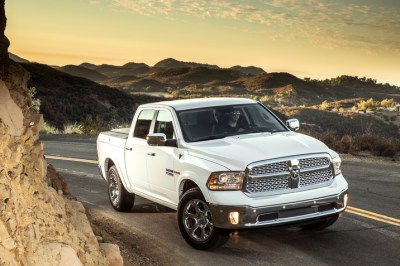 Source: courtesy of Fiat Chrysler Automobiles
It’s no surprise that Ford (NYSE: F) leads the U.S. pickup market. Its F-Series line has been the market leader for decades, and Ford has invested a massive amount of time and effort in keeping it that way.

But this might be a surprise: Fiat Chrysler’s (OTC: FIATY) Ram has gained a lot of ground on Ford recently, something that General Motors’ (NYSE: GM) all-new pickups haven’t been able to manage.

Chrysler’s Ram has gained a lot of ground this year
Here are the plain numbers: So far this year (through May), sales of Ford’s F-Series are up 1.9%, GM’s Chevy Silverado and GMC Sierra are up a combined 1.6%… and Chrysler’s Ram is up 21%.

That’s a huge gain and it represents a significant market-share win for Chrysler. What’s the secret? Is it just about incentives?

It is to some extent: Back in March, Chrysler was paying an average of $5,598 per truck in incentives. That was 35% higher than Ford and 46% higher than GM, according to J.D. Power figures.

It worked: The Ram outsold the Chevy Silverado in March for the first time in nearly 15 years.

But Chrysler dialed its truck incentives way down in April, to about $4,200 per truck. Meanwhile, GM, stung by its market-share losses, boosted its payouts to about $4,400 per truck. (Both were ahead of Ford.) That helped GM’s sales, which rose 11.9%.

But it didn’t hurt Ram much — Ram sales were up 17% in April, and another 17% in May. Clearly there’s more to Chrysler’s pickup success than discounts.

The Ram is a surprisingly strong contender on its merits, not just on price
If you haven’t checked out a Chrysler product recently, you might find it surprising to learn how good Chrysler’s products have become.

Years of neglect and mismanagement left Detroit’s third-largest automaker with a shoddy lineup of also-rans by the time Chrysler crashed into bankruptcy court in 2009. A lot of longtime customers gave up on the company.

Italian automaker Fiat was handed control of Chrysler — but when CEO Sergio Marchionne arrived at Chrysler’s headquarters in Auburn Hills, Mich., he didn’t find much in the way of new products in the cupboard.

Chrysler’s product development programs had been gutted, and its staff had endured deep cuts — with many talented employees choosing to leave what they saw as a sinking ship.

But those who remained had plenty of talent, and something else: a survivors’ mentality. Marchionne thought there was enough to work with. He sent help (and money) from Italy, and the company began work on a series of high-speed makeovers of its moribund product line.

To the surprise of many seasoned critics, those makeovers bore real fruit. The bones of Chrysler’s products weren’t bad, it turned out, and careful attention to detail made them shine.

Overhauled vehicles like the Dodge Grand Caravan weren’t all that different from what Chrysler had been selling when it went bankrupt, but they were different enough to be much more competitive. Sales boomed.

The Ram’s makeover was just one of several, but it won a lot of fans. Styling tweaks, a better interior, a new eight-speed transmission, and suspension adjustments made the Ram a much nicer truck to drive — nicer than its rivals, said some critics. Meanwhile, a bunch of small fuel-saving changes added up: Suddenly the Ram could be sold as a fuel-efficient choice.

The Ram’s market share at the end of 2009 was just 11.1%, as Chrysler had just staggered out of bankruptcy. By the end of the first quarter of 2014, it had risen to 21.7% — an enormous gain in a fiercely-contested (and extremely profitable) market segment.

Can the Ram keep gaining ground?
Ford has said that its pickup sales are likely to slip this year as it converts its factories to produce an all-new F-150 for 2015.

Chrysler’s in a good position to gain a bit of Ford’s lost ground. But the real wild card is General Motors. GM launched all-new pickups last year, but the 2014 Chevy Silverado and GMC Sierra haven’t set the market on fire.

Meanwhile, Chrysler’s practice of making frequent small tweaks to the Ram mean that it’s a product that is steadily improving. It has already gained considerable ground on the new GM twins since their introduction. It’s entirely possible that Chrysler could keep eating more and more of the General’s lunch as the year goes on.

The technology powering America’s comeback
A revolutionary technology is single handedly putting an end to the Made in China era. It’s creating “the next trillion dollar industry.” And Motley Fool wants you to get in on the ground floor. In a shocking video presentation we’ll tell you about the gadget that’s as disruptive as the steam engine and the printing press. Just click here to watch now!