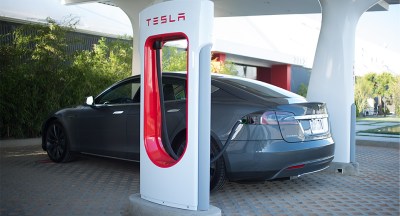 Source: Tesla Motors Inc.
When pump prices for gasoline hover around $3.50 a gallon, Americans buy more fuel-efficient vehicles than they do when prices fall below $3.00 a gallon. Investors have noticed the behavior, and one manifestation of the dive in gasoline prices is the beating that Tesla Motors Inc. (NYSE: TSLA) has been getting.

Shares of the all-electric car maker have dropped more than 15% in the past two weeks as lower crude prices will cut demand for the company’s cars. From a record high of more than $285 in early September, the stock closed at $207.00 on Friday, a dip of around 27%. The stock nevertheless continues to post a gain of nearly 38% since the beginning of the year.

According to research by Michael Sivak and Brandon Schoettle of the University of Michigan’s Transportation Research Institute, mileage ratings for new car sales in November posted a weighted average of 25.3 miles per gallon, the same as in October, but down from a record high of 25.8 mpg in August. The researchers suggest that two opposing trends have led to the decline in purchases of new, more fuel-efficient vehicles:

They also noted that in November fuel economy is up 5.2 mpg compared with October 2007.

We have already looked at the impact of low crude oil prices on solar stocks, but an even greater impact may have occurred among biofuels makers. Oil at less than $80 a barrel has squashed development of biofuels because, for the most part, they cannot be made profitably at prices less than about $80 a barrel.

When crude oil is priced between $80 and $95 per barrel, according to one observer, the number of options for unconventional (shale) oil plays diminishes and biofuels can effectively compete on price. If crude rises to around $100 or higher, the shale plays make more economic sense and biofuels are squeezed again.

In the short term, then, biofuels do not meet the economic hurdles. The long-term outlook is complicated by considerations of food versus fuel, changes in land use, the price (if any) of carbon and government support for biofuels.

Tesla faces similar doubts. Will consumers pony up $75,000 for a vehicle when one for half that price with low operating costs (i.e., cheap gasoline) is available? Right now, investors are betting that consumers won’t do that.