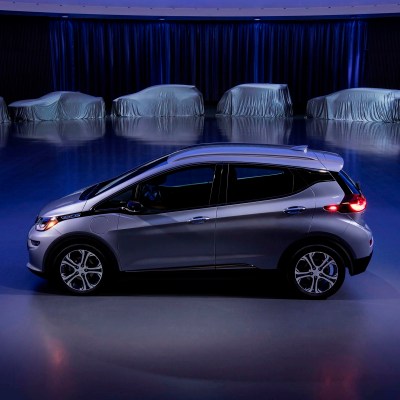 Source: courtesy of General Motors Co.
When U.S. House Republicans unveiled their tax reform plan on Thursday, the focus of most news coverage went to items like a permanent cut to the corporate tax rate, the phased-out estate tax and the reorganization of personal income tax brackets. There were other winners and losers in the plan, however, including electric cars.

The Republican plan proposes eliminating the $7,500 per vehicle tax credit for consumers who purchase an electric vehicle. The credit would disappear at the end of the 2017 tax year, according to a report at Automotive News.

Under existing law, the tax credit was available to every automaker on the first 200,000 qualifying vehicles the company sold. No carmaker has reached that level yet — not Toyota Motor Corp. (NYSE: TM) and not Tesla Inc. (NASDAQ: TSLA).

[Eliminating the $7,500 credit] will stop any electric vehicle market in the U.S., apart from sales of the highly expensive Tesla Model S. There’s no Tesla 3, no Bolt, no Leaf in a market without incentives.

Automakers are investing billions of dollars in manufacturing electric cars. Several, including Volvo, BMW and Land Rover, plan to introduce several hybrid and all-electric models into their product lines by the end of the decade. General Motors Co. (NYSE: GM) has said it will introduce two new all-electric vehicles in the next 18 months and expects to have as many as 20 new all-electrics by 2023.

Ford Motor Co. (NYSE: F) CEO Jim Hackett said in early October that by 2030 some two-thirds of global vehicles will include some level of electrification and only one-third will be powered by internal combustion engines. The falling cost of constantly improving battery cells is bringing down the cost of new all-electric cars like the Chevy Bolt and the Tesla Model 3, both of which cost around $30,000 with the U.S. tax credit.

In addition to lower battery costs, several governments, including the United Kingdom and France, have adopted plans to phase out sales of new gasoline- or diesel-powered vehicles over the next couple of decades, and China, the world’s largest market for new vehicles, is working on a similar ban.

GM said in a statement to Automotive News that it will fight to maintain the credits, calling them “an important customer benefit that can help accelerate the acceptance of electric vehicles.”

So why is the U.S. Congress proposing to kill a tax credit for a globally popular new technology that would reduce demand for fossil-fuel burning and cut vehicle emissions? The answer to that question is left as an exercise for the reader.