One of the most carefully followed new car brand rating reports — the J.D. Power 2019 Initial Quality Survey — was released today. The survey influences new car buyers as the largest manufacturers in America vie for a share of the 17 million vehicles sold each year. This year, three South Korean brands topped the list, pushing out the perennial leaders from Europe, Japan, and the U.S.

The J.D. Power IQS is based on a measure of reported problems per 100 vehicles. The cars that qualify are 2019 models. J.D. Power asks drivers about their experiences in the first 90 days they own or lease the vehicles. Genesis took the top sport with 63, followed by Kia at 70 and Hyundai at 71. The industry average across the 32 brands was 93. This industry average remained unchanged from the previous year.

Ford Motor did extremely well in the survey. Its flagship Ford brand scored fourth on the list with an 83. Its Lincoln brand, which has struggled against German and Japanese competition, ranked fifth at 84. J.D. Power researchers pointed out that Ford and Lincoln’s high ranking “mark … the first time both Ford Motor Company brands placed in the top five in the same year.” Ford’s F-150 is one of these top-selling American cars.

The Ford brand’s major competition, Chevrolet, ranked sixth on the list with a score of 84. None of Lincoln’s luxury rivals, with the exception of Toyota luxury brand Lexus, posted scores above the industry average. Although Porsche and Mercedes Benz typically do very well, that was not true in this year’s survey.

As a matter of fact, many luxury brands fared poorly. The two bottom spots went to Jaguar with a score of 130, and Land Rover, registering at 123. Both are owned by Tata Motors, a large car manufacturer based in India. However, each brand reported that it suffered from fewer problems than were reported on the previous year’s list. As measured by problems per 100 vehicles, Jaguar had 18 fewer and Land Rover improved by 37.

Dave Sargent, vice president of global automotive at J.D. Power, noted that many problems that have plagued car quality for years continue today. These include noisy brakes and suspensions, and problems starting the car. Driver-assistance features, installed primarily to help safe driving and “which are critical for building consumer trust in future automated vehicles,” were also criticized.

The 2019 IQS is based on data collected from 76,256 purchasers and lessees of new 2019 model-year vehicles that were in the field from February to May of this year. Many of these new cars are so popular they’re out of stock at car dealerships. 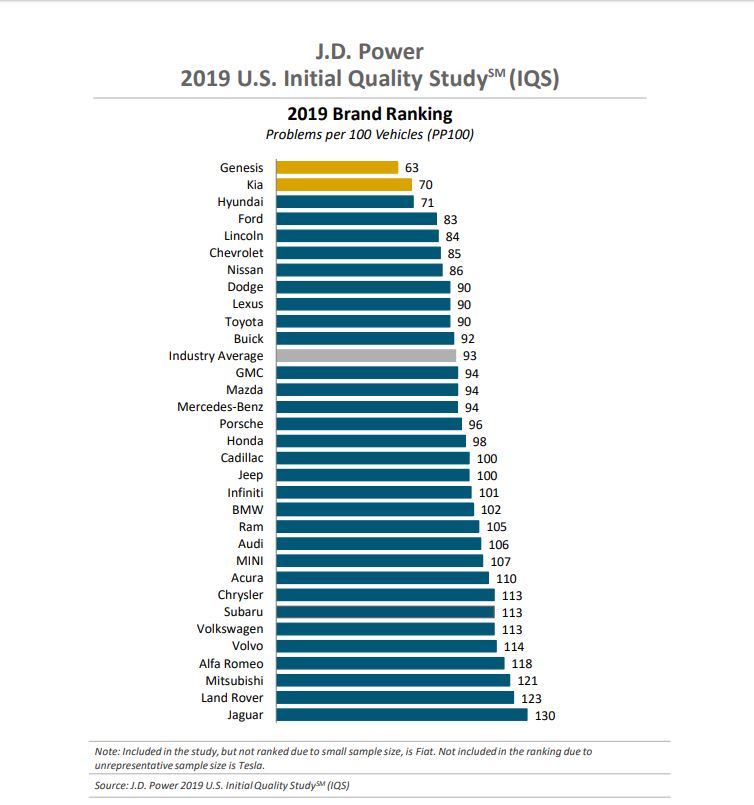 That Honda May Stop Running