Global Electric Vehicle Sales Up 46% in First Half of 2019

The best-selling vehicle was the Tesla Model 3, which sold about 128,000 units in the first six months of this year. In the United States, the Model 3 outsold internal combustion-powered mid-luxury sedans from Mercedes-Benz, BMW and Audi by a wide margin.

Of the top 10 selling PEVs, six were Chinese. The non-Chinese brands included Tesla, Nissan (Leaf EV), Mitsubishi Outlander PHEV and Renault Zoe EV. Only the Outlander and the Tang PHEV from Chinese maker BYD are plug-in hybrids; the other eight best-sellers are BEVs. The data was reported Tuesday by EV-volumes.

The report included the following chart illustrating sales of Tesla’s Model 3 in Europe, the United States, China and globally against the BMW 3- and 4-Series, the Mercedes C-class, and the Audi A4 and A5. The Model 3 sold more than twice as many units in the United States as any of these competitively priced midsized luxury vehicles.

The internal combustion-powered cars were much bigger sellers in Europe and China, but EV-volumes attributes the gap in Chinese sales to the import duties on the Model 3 that will eventually disappear as Tesla begins manufacturing the cars in China.

Including hybrids (HEVs) like the Toyota Prius and a new class called mild hybrids (MHEVs) like the 2019 Ram 1500 pickup, 3.05 million electrified vehicles were sold in the first half of 2019. The following chart from EV-volumes shows the way sales are divided among the four types of electrified vehicles in China, Europe, the United States, Japan and the rest of the world. 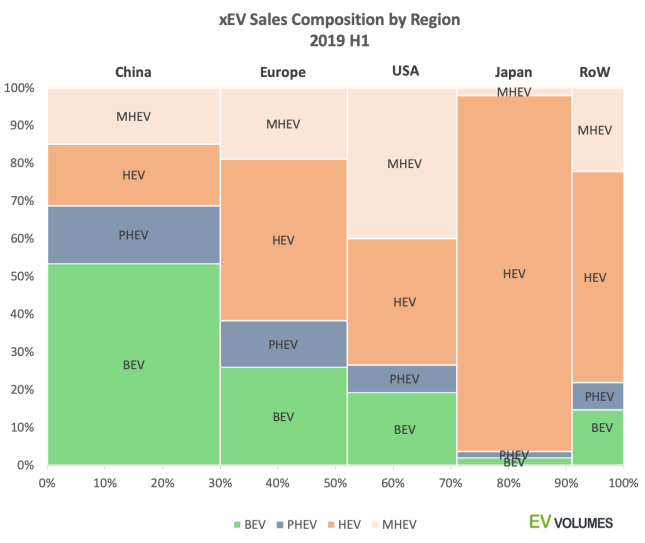 Battery electrics accounted for 50% of all electrified vehicle sales in China in the first half of the year but only about 2% of Japanese sales. HEVs are the best sellers in Europe, while MHEVs are the top sellers in the United States.

EV-volumes expects full-year 2019 sales of PEVs to fall between 2.5 million and 2.7 million units, a drop of 3% to 5% from its earlier forecast for sales of 3 million. The main reason is the subsidy cut in China that went into effect in July. Another reason is weak sales of anything but the Model 3 in the United States.

Even though the unit volume is lower, the global share of new PEV sales is expected to range from 2.7% to 2.9%, up 700% compared to five years ago. By the end of this year, PEVs on the world’s roads and highways will number nearly 8 million or just 0.57% of the entire global fleet of 1.4 billion light vehicles. But, EV-volumes comments, “Growth is exponential, though, and the overall picture will change much faster than historic sales suggest. Adoption of successful technology follows S-curves, not straight lines.”

This Is The Electric Car With The Longest Range