Will Online Car Buying Grow Quickly Enough to Save Automakers?

New car sales during the second quarter of this year fell by a third or more year over year for the Detroit Three companies. Sales fell by 34% at General Motors Co. (NYSE: GM), by 39% at Fiat Chrysler Automobiles N.V. (NYSE: FCAU) and 33% at Ford Motor Co. (NYSE: F).

The COVID-19 pandemic hit both automakers and consumers at the same time, making April the cruelest month. Then, as buyers returned to the market in May and June, automakers were short of inventory and the supply of new vehicles for sale was limited.

The pandemic forced carmakers and dealers to think outside the box in order to find a way to attract customers. The internet was the obvious choice, and sellers ramped up their online efforts. But it looks like getting Americans to buy cars sight unseen is going to be an uphill slog.

According to a new study released Thursday by J.D. Power, the pandemic caused nearly two-thirds of potential vehicle buyers to reconsider their plans and 40% to delay making a decision.

J.D. Power’s Jon Sundberg commented that “it is more imperative now than ever that manufacturers better equip their online retailing presence to cater to this change.” According to a new report from Deloitte, however, just one-quarter of consumers are interested in a fully online purchase process.

Deloitte expects global auto sales to fall by 18.5 million units year over year in 2020 to 70 million. That’s a drop equivalent to combined expected sales this year in the United States, the United Kingdom and Japan. In Deloitte’s words, “A full demand recovery may take years.” The firm believes that it will be “very important” for automakers and dealers to continue offering digital tools that ease the length of time it takes to make a vehicle purchase and reduce the amount of paperwork needed to complete a sale.

J.D. Power’s survey of customer satisfaction with manufacturers’ websites places Mercedes-Benz at the top of the heap in the luxury market with a score of 850 out of a possible 1,000. Among mass-market carmakers, GM’s Chevrolet and FCA’s Ram posted a top score of 843. The luxury segment’s average score was 835 and the average for the mass-market segment was 825. Full rankings are shown in the charts below.

Both J.D. Power and Deloitte recommend that carmakers and dealers continue to develop their internet retailing chops, or, as Deloitte’s analysts put it, put more effort into “integrated digital tools can have a transformational impact on the vehicle purchase process and overall brand engagement.”

Online auto retailer Carvana Inc. (NASDAQ: CVNA) CEO Eric Garcia told Yahoo Finance in an interview last week that sales spiked by 20% to 30% in May at the online-only sales site. Likewise, a traditional dealer with 17 locations in southeastern Michigan told the Wall Street Journal that his business spiked nearly 20% because his stores were “finally utilizing technology more efficiently.”

The trick is going to be persuading more than 25% of consumers to shop for and buy a new vehicle costing an average of more than $35,000 without ever seeing it, kicking the tires or taking it for a test drive. 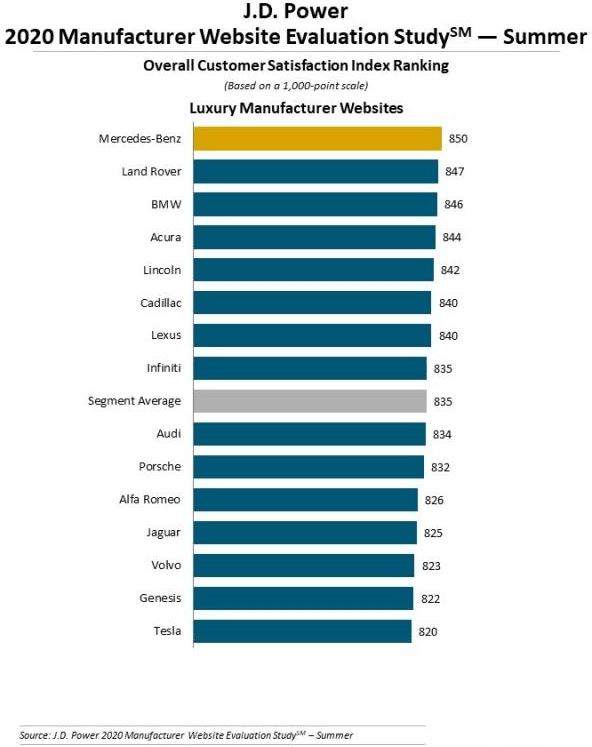 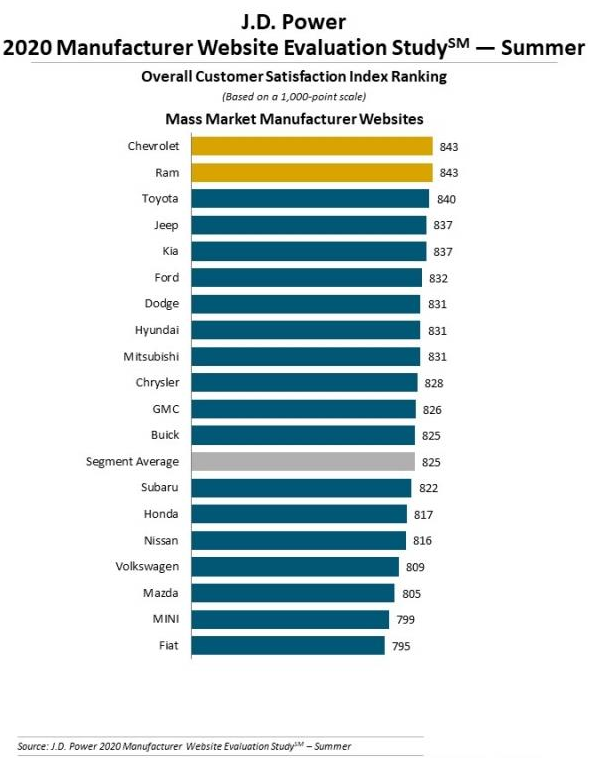