Bank of America Corporation (NYSE: BAC) is due to report earnings on Friday morning and this will be the third DJIA component to report this week and the second of the DJIA financial components. Thomson Reuters has consensus estimates of $0.27 EPS and $26.69 billion in revenues.  Investors should know that those estimates have been cut in recent days ahead of the earnings.  Next quarter estimates are $0.31 EPS and $26.78 billion in revenues.

Bank of America has fought many issues.  Among these are ongoing fears of a mortgage put-back event, credit metrics that are possibly not improving as fast as elsewhere, charges against executives, fresh political findings that may bring more charges and negative press, and on and on.

BofA is also out of favor compared to the better banks like JPMorgan Chase & Co. (NYSE: JPM) and Wells Fargo & Co. (NYSE: WFC) as those two have been given the Federal Reserve green-light to resume paying higher dividends and to resume share buybacks.  BofA has a paltry 0.3% yield and it is effectively not allowed to grow now that it is over the 10% deposit ceiling. 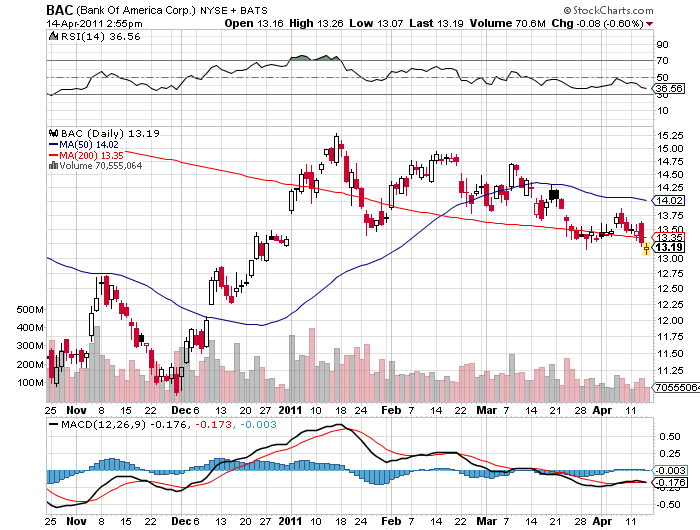 There may be something more sinister than most investors realize if you look at Bank of America’s chart.  The 50-day moving average has declined and is currently $14.02.  BofA has not been above the moving 50-day target since early March and its shares were technically weak since mid-February.  The 200-day moving average my be even more important. This was just violated if you look at the StockCharts.com chart here today.  That level to watch is $13.35.

Shares were trading at $13.18 in late afternoon trading versus a 52-week trading range of $10.91 to $19.86.  What is interesting is that it looks like shares did hit a low on an intraday basis for 2011 of $13.07 this morning.  Imagine where BofA might be trading if the broader stock market was not at least bolstering stocks.

Investors want to know what is going on with mortgage put-back risks and if a master settlement is coming down the road from the ‘sins of thy father’ (or sin’s of the step-son) via Countrywide.  Elsewhere, hopefully more clear data will come from the dividend disappointment as well as loan loss reserves and credit metrics.

Stock options expire tomorrow and we do not see options traders currently pricing in a move of more than about $0.40 in either direction based upon the closest puts and calls trading today.  For whatever it is worth, there were over 100,000 contracts traded in the APRIL-2011 $13 PUTS alone and that translates to another 10 million shares on a fully leveraged basis.

There may be some good news here if you are a contrarian.  In the annual report, CEO Brian Moynihan was less negative than many expected.  Maybe Moynihan has his head in the sand, or maybe things are being treated as far worse than they are.  If the latter case comes true then there could be a significant rally. The short interest is also not astronomical and it fell marginally at the last report to about 78.9 million shares.