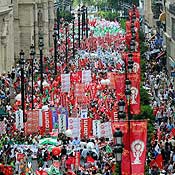 The continuing difficulty that Spain faces in persuading investors to buy the country’s sovereign debt got a little worse today. Treasury Minister Cristobal Montoro told a Spanish radio station that it is “technically impossible” for the country to bail itself out. Spain is scheduled to auction up to €2 billion on Thursday, but with interest rates already near 7%, the perceived risk of the country’s sovereign debt means that “Spain does not have the door to the market open,” according to Montoro.

The minister also claimed that the amount needed to bail out the country’s banks is not “astronomical,” but he did not comment on an estimate of €40 billion from the chairman of Santander bank. The country’s sovereign debt has been estimated as high as €800 billion, much higher than the €500 billion total available to the European Stability Mechanism (ESM), which will become available this summer.

Spain does not have nor is it likely to be able to borrow €40 billion on its own to bail out the country’s banks. So it must rely on the ESM, which will likely impose stiff conditions on a loan. Those conditions, sure to continue the European austerity tradition, threaten the government’s ability to remain in office. And that’s all before the Eurozone tries to figure out how to help out with Spain’s sovereign debt.

Spain has tried to formulate its problem as a European and Eurozone problem. Montoro is cited at cnn.com as saying,

What’s at stake is the euro and they [the Eurozone members] must convince themselves and the markets that the euro is a reality and it does have a future.

That remark is directed straight at Germany. But the Germans already believe in a future for the euro — with or without Spain or Greece or any of the other weaker continental economies.