Something seems to be happening at Knight Capital Group, Inc. (NYSE: KCG). Whatever it is, it sure does not seem like a good development. It is not really any longer a secret that Congressional oversight is probably coming after computerized trading, even if the Congressmen evaluating this probably do not really understand what they are trying to regulate. Knight’s CEO has already hinted that new rules are likely to be tougher on Knight and firms like it. Those trading rules may be from regulators, but the NYSE Euronext Group (NYSE: NYX

) and/or the NASDAQ OMX Group (NASDAQ: NDAQ) are both likely to put in trading curbs or other governors to keep computerized trading firms from getting out of hand at any point in a trading day.

Knight also recently hired International Business Machines Corp. (NYSE: IBM) to review its trading software. There is also at least one class action suit and an ‘investigation’ by another law firm. We even saw that the SEC’s review of trading glitches has been postponed out to October. The reality is that the known negatives are out there. The trading pattern is signaling that there is either something else brewing or that the known situation has to be reevaluated.

A KBW research report shows that Jefferies Group, Inc. (NYSE: JEF) could have a $105 million gain on its $125 million investment in Knight, or $91 million after accounting for the unit stake its investment was made through. That doesn’t exactly sound bad does it?

So here is why there is some obvious concern in the shares of Knight Capital. Shares closed at $2.66 on Wednesday at the lows of the day. That is actually at the lowest close since shares closed on August 2, 2012 at $2.58 after the prior day’s close of $6.95 and after the day’s close before that of $10.33. In short, this is the lowest close since the bailout investment was made by the trading community to save Knight Capital.

And to add insult to injury, Knight’s shares are down 1.3% at $2.62 today. That would effectively mark the lowest trading since we say daily lows of $2.59 on August 6. We have also seen for consecutive weeks of a lower closing price trend as well. When you get an implosion situation followed by a bailout recovery, it seems hard to care much about the stock charts. But to ignore the technical trends is probably silly.

Is something new happening here, or is Wall Street just accepting more and more that Knight Capital’s future will not ever be what it could have been back in July when shares were well above $10.00 before it shot itself in the foot over its trading implosion killed the firm.

Stay tuned. Here is the chart over the last two minths from StockCharts.com: 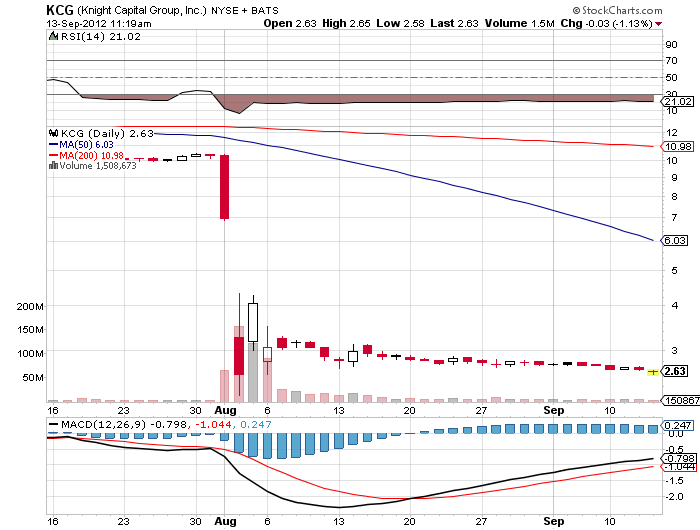