As Wells Fargo Boosts Payout Ratio, Dividend and Buybacks to Rise and Rise

Source: Wikimedia Commons
Wells Fargo & Co. (NYSE: WFC) has become the safest of the large banks in America. That can always change in the years ahead, particularly if another mortgage or housing crisis arises. But for now it is the safest, and Wells Fargo is increasing its targeted payout ratio for its shareholders. The verdict — higher dividends are coming!

Tuesday marked the Wells Fargo Investor Day for 2014. The bank sees the current environment as a slowly growing economy that will bring opportunities for Wells Fargo. It sees housing remaining strong, but it expects home price appreciation to moderate. The bank also sees employment levels improving and being well positioned for rising rates and/or a variety of environments.

Here is where investors for income and earnings will care. Wells Fargo is targeting a return on assets of 1.3% to 1.6% and a return on equity of 12% to 15%. The new payout ratio for dividends, the net payout of common stock dividends and share repurchases less issuances, will be set in a range of 55% to 75%. Its prior target for a payout ratio had been 50% to 65%.

The long and short of the matter is that Wells Fargo could simply spend more money buying back stock if it chooses to. That is up to the board, but this leeway also means that another 5% to 10% of income could be paid out, implying a chance for dividend growth, even if its earnings do not grow as much as expected.

With shares at $49.30 on Tuesday, Wells Fargo already has a common stock dividend yield of 2.84%. The current annualized payout of $1.40 per share compares to earnings per share of $3.89 in 2013 and projected earnings of $4.10 per share in 2014. Again, the “payout ratio” includes buybacks and dividends, but there is room for higher dividends either way, particularly if the overall payout ratio is rising.

At the last Wells Fargo earnings report in April, the bank projected that it would repurchase up to 350 million of its own shares.

Wells Fargo shares have traded in a 52-week range of $39.40 to $50.49, and the Thomson Reuters consensus price target is $52.32. As far as proof as to why Wells Fargo is the safest of all the big money center banks: its book value per share is $30.48, making it by far the biggest share price premium against book value versus its major peers. 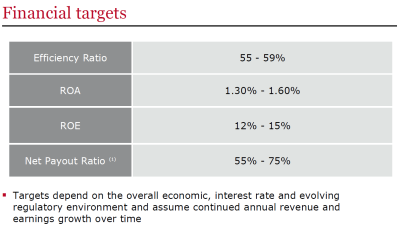