Does This Mean Genworth's Turnaround Has Finally Turned Back Up?

At the end of a July, a report from Standard & Poor’s kept a Hold rating. Still, it had a $5 price target for 12 months out. It has a high risk assessment on the stock and it said:

Our risk assessment reflects the significant exposure of the mortgage insurance business to the volatile (albeit recovering) U.S. housing market and to the long-term care insurance market. Also, Genworth is vulnerable to investment losses and has a weaker capital position than many peers.

Also at the end of July, BTIG maintained a Buy rating and a $5 price target. It brought up the first-quarter earnings beat but said that the stock had still slid 30% since that report. Its view then stated:

We do not view lower interest rates during the final stretch of the second quarter (2016) or even an outlook featuring persistently lower rates as justifying a 30% drop in Genworth shares or even a decline of half that much. As a consequence of the pullback, Genworth shares are even deeper in the bargain bin at 0.15x the company’s book value ex. AOCI per share as of March 31… As such, we think even relatively stable second quarter operating results from Genworth could be sufficient to give the stock a boost. At such a low valuation, we believe the impact of interest rates is far down the list of factors that should be driving the company’s share price.

It was back in May that Compass Point kept a Buy rating but lowered its target. The firm said:

Genworth remains a high risk investment as volatility in the shares will likely persist as the company executes its transition strategy. We maintain our Buy rating, but are lowering our price target to $5.25 from $5.50.

Unfortunately, Genworth is just not followed by that many analysts these days. Many of the larger firms that used to cover it have seen their analysts drop coverage. It would not be wise to blindly jump in here without consideration and without seeing how the reaction holds in the coming days. Still, it is encouraging to see the trading pattern and to see Genworth shares making such a significant mark. Time will tell and the verdict remains out.

A chart from StockCharts.com has been included. The additional issue to consider here is that Genworth’s chart may have changed handily. The chart below shows that the 50-day and 200-day moving averages were taken out to the upside. That is generally good, but the trading action in the coming days will need to confirm whether this can hold. Other attempts to breach the 200-day moving average have not held, so stay tuned. 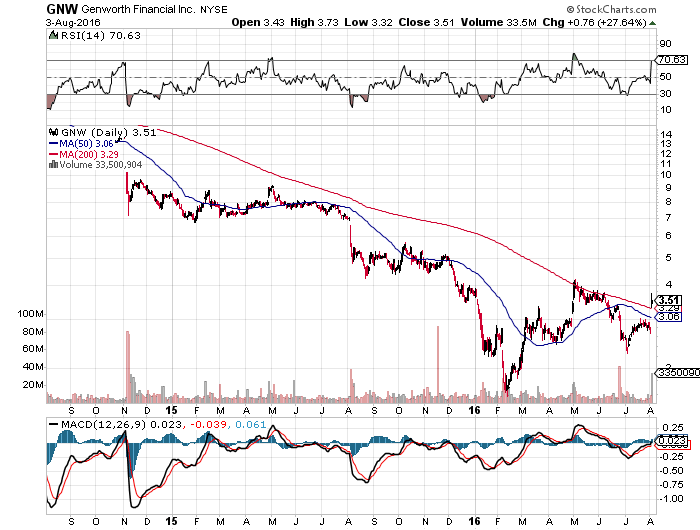