Source: Thinkstock
This past week was not kind for social media investors by any stretch of the imagination. Most of the key social media stocks were sold off so much that one has to wonder if they are becoming oversold, or if they are at least close to being in an oversold chart setup. The reality is that the earnings reports just did not live up to what could still justify such high valuations, and the stock market has removed billions of dollars from the social media valuations combined.

24/7 Wall St. wanted to see what was in the cards for the likes of LinkedIn Corp. (NYSE: LNKD), Twitter Inc. (NYSE: TWTR) and in Yelp Inc. (NYSE: YELP). It may seem that the sell-off in each was excessive, but these companies all still have valuations that are excessive on forward price to earnings (P/E) ratios and against future revenues.

We have reviewed just how much these companies sold off by during the week. We have also included additional color on the earnings reports, trading history and analyst calls.

Another issue that was shown for each is a six-month stock chart from StockCharts.com. These show 50-day and 200-day moving averages for trend lines.

Revenues in the most recent quarter were $637.7 million, while Thomson Reuters had estimates of closer to $636 million. It was a beat, but not by much. Then LinkedIn gave guidance of $670 million to $675 million for the coming quarter, under what was easily supposed to be a $700 million quarter.

This is against a 52-week range of $136.02 to $276.18, but the earnings report was followed by many analyst downgrades or lowered price targets. LinkedIn was still worth about $25.2 billion. That old $290+ consensus analyst price target is no longer the case. Here were some of the cautious analyst calls: 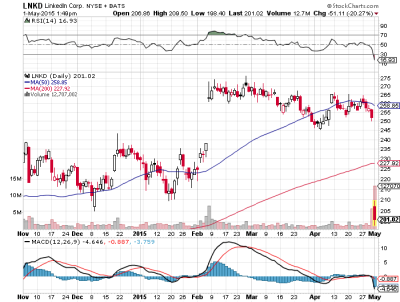