The Money Behind The Kentucky Derby - Hundreds of Millions (or More) 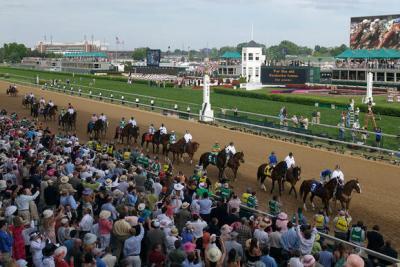 Source: Churchilldowns.com
The Kentucky Derby is one of those events that pulls in viewers who never even bother with watching horse racing any other days of the year. It is also represented as the oldest sports spectacle in America. This 140th running is also a huge event as far as money is concerned to the economy.

The winner of the race of course gets a huge pay day, once up front and then for years ahead. A $2 million guaranteed purse is one thing, but stud fees reap tens of thousands of dollars (or more) for years and years into the future.

Perhaps the biggest winner itself is Churchill Downs Inc. (NASDAQ: CHDN). This public horse betting track owner hosts the Derby, and this company’s value is now up to $1.58 billion. It even pays a dividend, but only about 1% for a yield. This company’s second quarter revenue in 2013 was $283.77 million, and the Thomson Reuters consensus for the second quarter of 2014 is $313 million, with a range of $308 million to $323 million. To put this in perspective, this quarter’s $313 million in revenue is expected to be 37% of the expected annual revenue of $839 million. This is Christmas for Churchill Downs! Also, its shares rose 2.2% this last week ahead of the event.

Then there are the endorsements and commercials to consider. YUM! Brands Inc. (NYSE: YUM) is sponsoring the event — hopefully targeting KFC for Kentucky rather than Pizza Hut or Taco Bell. NBC, owned by Comcast Corp. (NASDAQ: CMCSA), is handling the televised broadcast.

Betting is, of course, huge. A figure shown on CNN showed that total betting at the 2013 Kentucky Derby was more than $130 million. That does not include the “gentlemen’s bets” amongst friends and pooled bets around the country that are off the books and never counted.

Many of the attendees have spent hundreds of dollars, or thousands, on their suits and dresses. And your guess is as good as anyone’s as to how much those ladies hats have cost.

Let’s not forget about all the airline tickets, hotel room bookings, rental car fees, as well as restaurants and bars, and even the gasoline. Then there is the pesky cost of parking and transportation to and from. If you lowball a plane ticket and hotel charge at $500 per head, at say 50,000 (conservative) who travel in for the event  – that is another $25 million. You know it is really more.

CNBC gave its ten things you need to know about the Derby if you are attending it.

How much the tally will be spent all around for this 140th running of the Kentucky Derby is an unknown. But the one thing that is obvious is that it is in the hundreds of millions of dollars. Maybe much more if you consider the amount that gets spent in bars and at home parties that neither Churchill Downs nor its sponsors ever see a penny of.