Drought Be Damned: First Results in for ‘Tolerant’ Corn 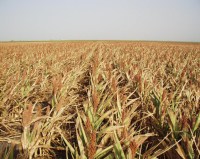 Farmers were panicking this summer, dealing with the worst drought to  hit the US in five decades, but from this disaster progress is  blossoming in the form of a drought-tolerant corn seed and a hearty race to the finish line between three companies who are scrambling to  demonstrate that corn at least needn’t fear the dreaded drought.
Without an actual drought, it would have been difficult to genuinely test this new genetically modified corn-seed, and the first results are now in.

The process of making corn seed drought-tolerant involves genetic modifications that keep the plant from losing hydration through respiration. This is  done by reducing the size of the plant’s stomata (pores that regulate the flow of water from the plant’s surface). The experimental seeds also carry a gene that helps plants draw water more gradually from the soil. Lack of sufficient water also reduces a plant’s resistance to pets and  hinders kernel development, so modifications help reduce this  vulnerability.

The top three players in drought-tolerant corn seed are DuPont (NYSE: DD), Monsanto (NYSE: MON) and Syngenta (NYSE: SYT). For now, DuPont has a slight advantage. It is the first to announce preliminary results, saying last week that its Aquamax seeds boosted grain yields by more than 8% this year. What does this mean, exactly? DuPont is basing its announcement on average yield results from 2,523 fields with what it calls “water limited” environment and comparing them to other conventional hybrids out there. According to DuPont, Aquamax showed a higher yield in 69% of the fields under the same “water limited” conditions. However, that yield advantage was lower, at 2% (or 59% better than competing hybrids), in environments with more water.

Monsanto’s drought-tolerant corn seed is called DroughtGard, while  Syngenta is pushing its own drought-tolerant seed, Artesian. We’re not sure yet how DroughtGard and Artesian will fare, as neither have offered up preliminary results—but expect  them very soon. After all, there has never been a better time to test the seeds in the intended environment. Neither Monsanto nor Syngenta will want DuPont, which is promising more results in a month, to gain
too much of an edge on harvest data.

Still, despite the fact that Monsanto has not released preliminary results for DroughtGard, the company is in good standing, managing to narrowly surpass DuPont this year with slightly over 37% of the US corn-seed market, compared to DuPont’s flat 37% share. Monsanto’s share represents a gain of 1%, while DuPont has experienced neither gains nor losses in market share.

While DuPont is the first to announce yield results, Monsanto was the first to come on the scene with its genetically engineered drought-tolerant seed, which was planted in the spring, albeit when there was still enough rainfall and no concern of drought. Some 250 farmers planted Monsanto’s DroughtGard on nearly 100,000 acres of land across the western Great Plains this spring.

Monsanto’s DroughtGard was developed using biotechnology, which means genetic engineering. DroughtGard contains a special bacterial gene that enables it to retain water. It remains the only genetically engineered drought-tolerant corn seed approved by the Department of Agriculture. The seeds are expected to be available for sale next year.

Dupont’s Aquamax was developed differently, using advanced breeding techniques, and in five different seed varieties. Bred for DuPont by Pioneer, the seeds went on sale (at the same time as Artesian) in 2011. DuPont is also planning to unveil six additional seeds that boast noonly drought-tolerant traits but pest resistance and other higher-yield characteristics.

What do farmers think? Well, they’re still hopeful that the new genetically engineered seeds will offer some respite from drought, but skeptical that this will be an end-all solution. After all, the seeds are not drought “resistant”, only drought “tolerant”.  They worry that if a drought is too severe, not even these new seeds will be enough.

The companies themselves are not marketing their seeds as miracle cures; but rather as a way to help reduce losses in the face of drought.

The process is not without its critics, however. The Union of Concerned Scientists, for instance, has energetically targeted Monsanto in particular.

The Union released a report in June questioning whether drought-tolerant corn seeds are viable at all. The report argues that we are still 10-15 years away from developing such a seed and that they would likely be prohibitively
expensive. Targeting Monsanto specifically, because of its use of genetic engineering, the Union estimated that the company’s new seeds would boost US corn productivity by only 1%, at best.

Still, against the backdrop of massive agricultural losses this year,  genetic modification is gaining momentum and support. The drought has caused an estimated $18 billion in damage to corn, soybeans and other key crops this year—and even  critics recognize that the solution cannot exclude genetic modification.

We like where this is going, but there are still plenty of challenges  ahead and current test results are based on a single drought. Droughts  vary in terms of time of onset, length and cause. Then there is also the question of climate change, or at least climate uncertainty. What  happens if everyone starts using drought-tolerant seeds and we  experience a flood? Will the new seeds be able to handle the reverse? No one knows.

So the first results are indeed promising, but not definitive. Keep your eye this one, though, because one way or another we are looking at  genetic modification and advanced breeding technology for a new strain  of seeds. The trend is already in place, with 88% of US corn seeds genetically engineered to provide resistance against pests and herbicides.