Source: Thinkstock
As we said the whole way down, it may be a painful lesson or a fool’s game to try to predict or to try to catch the bottom on the price of gold. The World Gold Council does have a vested interest in gold remaining relevant, but it does not exactly give price predictions. So if it is not saying that gold hit rock bottom, the group is at least signaling that the latest gold price crash was driven by speculative traders in the futures markets.

Aram Shishmanian, CEO of the World Gold Council, issued a press release today signaling that the group’s interpretation and analysis of the cratering price of gold. While the speculators drove it down, He is signaling that shortages remain in the physical bullion market and that premiums are being paid above market for physical gold. With demand being high in the United States, Japan, Europe, China, and India, his take is simply that real gold buyers are viewing this major price drop as an opportunity to buy gold at prices not seen in recent years.

The World Gold Council showed that it is already seeing shortages for bars and coins in Dubai gold trading. Premiums in Mumbai are at $26 per ounce and $6 per ounce in Shanghai. The Council’s view is that buyers are willing to pay more than current spot prices for the metal.

We would point out at least one thing here in contrast to the World Gold Council’s views. It is at least feasible that gold sellers who have been long gold for some time are taking huge losses, and they may be demanding premiums to sell.

Shishmanian said, “It has become increasingly clear over the course of the past week that the fall in the gold price was triggered by speculative traders operating in the futures markets. Their short-term view of generating a trading profit is in stark contrast to the views of long term investors in gold, as evidenced by the massive wave of physical gold buying that began over the weekend and accelerated following Monday’s further decline.”

Shishmanian was also quoted as saying, “Gold operates on the basic economic fundamentals of demand and supply. Our view is that demand is strong while supply remains constrained, and that this dynamic ultimately drives the long-term price of the metal.”

We have three issues we have been bringing up on our own for gold of late, followed by current and past charts below. First off, a few analysts are starting to defend the battered gold miners despite the pounding of 40% in some cases so far in 2013 alone. Another issue is that six very surprising nations have their central banks  buying up the excess gold. On a last and perhaps confusing issue, PIMCO’s Bill Gross sounded like he was saying “Sell Gold” but his public relations acted as a cleanup crew saying that it was not wheat he meant and that Mr. Gross would actually be a buyer of gold here.

By now everyone knows how bad the price has fallen. Now here is a 5-year gold chart from Kitco.com showing just how bad the carnage is:

And now, how would you like to be able to go back in time and sell your gold at the notorious “death cross” chart pattern when it first arose when gold was still above $1600? This chart from stockcharts.com. 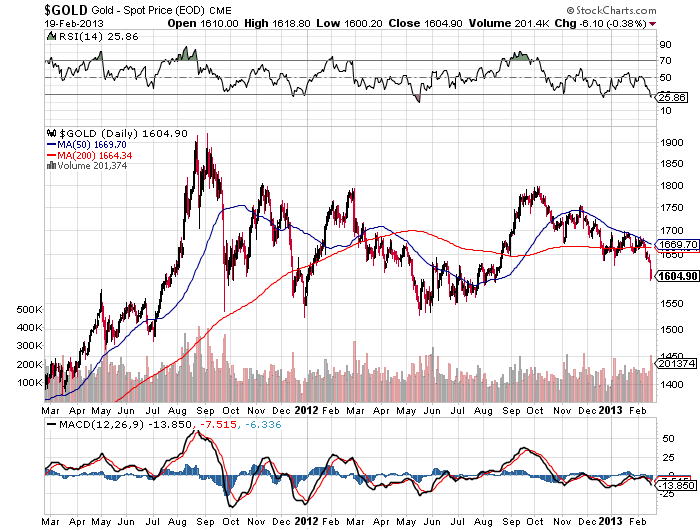