The Big Buy Signal in Gold Miners -- Maybe in Gold Too

Source: Thinkstock
Being in the gold mining and production business sure lost its luster, compared to when gold was on its way up to $2,000 per ounce. All things, even bad things, can come to an end — maybe even the death march in gold. Gold miners are now back, and the noise of the news may be signaling that this beaten down sector is finally a buy.

Again, the news may still look bad on the surface. The charts are telling you something entirely different. Gold miners have been forced to revalue the worth of their reserves based on the death march we saw in 2013 in gold. This is much like banks writing down loan values or writing down the value of securities they own.

The Market Vectors Gold Miners ETF (NYSEMKT: GDX) is signaling a possible breakout. This is still in the developing stage, but the gold miners index exchange traded fund is signaling the first true breakout under development going back to September of 2012. The difference between then and now is that the ETF price is half of what it was back then.

This is the sort of chart that gold bugs will pay close attention. Our word of warning is that charts are charts, and they often fail to materialize into developments. To prove this point, the chart shows that the gold miners ETF tried four different times in late 2012 and early 2013 to break out of that 200-day moving average overhang. That was when the ETF was up in the $40s, versus the mid-$20s now.

Another word of warning on the wall is from the fundamentals. Many of these gold miners are now trading above the Thomson Reuters consensus price targets. That being said, maybe the targets were lowered too much during the dog days — or maybe the analysts have to raise their targets substantially in the days and weeks ahead.

Barrick Gold Corp. (NYSE: ABX) had seen its stock fall 50% before its recent recovery. Now shares are up more than 2% to $20.55, and the company has lowered its gold reserve valuation. That is not unique for gold miners and producers — after all, the price did crater up until recently. This $20.55 share price on Friday compares to a 52-week range of $13.43 to $32.12. Sadly, much of the recovery here has already been seen, but Barrick trades at only about 12 times expected earnings. It now trades above the consensus price target of $19.50.

Silver Wheaton Corp. (NYSE: SLW) cannot be ignored here as well. This one is more silver, but it had higher gold ambitions before the prices tanked. This gain on Friday is up 3.5% at $25.61, and the 52-week range is $17.75 to $35.92. Silver Wheaton is up already close to 50% from its lows, but the consensus analyst price target is $28.40. Silver is what we and others have referred to as the devil’s metal, and this proves just how volatile it can be.

A final word of warning is that for a stock or any asset to break out on the chart generally means that much of the rally has already been seen. That being said, chart watchers will pay close attention here — and it is safe to assume that many short sellers will be betting against this move developing. 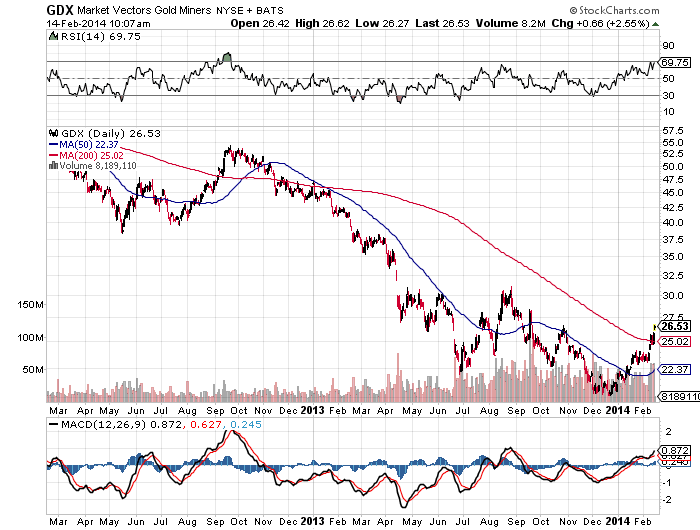 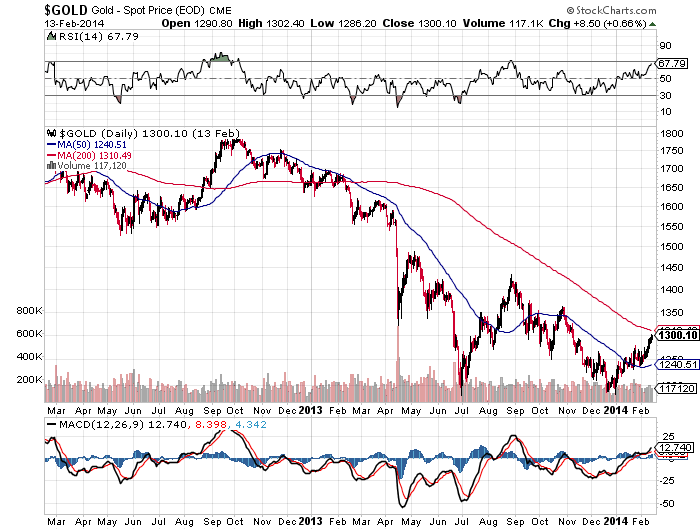