What Would a Move to Organic Milk Cost Starbucks (and Us)? 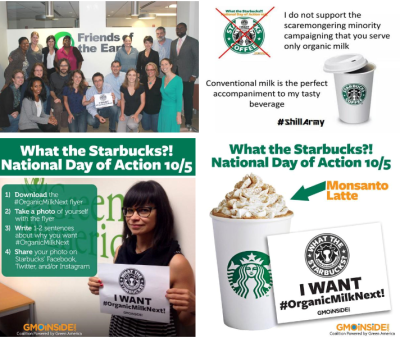 Source: https://twitter.com/search?q=%20%23OrganicMilkNext&src=typd
Starbucks Corp. (NASDAQ: SBUX) may soon find itself in a media swarm at the same time that its shares have pulled back handily from recent highs. Howard Schultz and his team are likely will have to at least consider or calculate the costs of a move that could be a risk to Starbucks’ profit margins or which may raise prices ahead for its customers. A movement is currently underway to try to get Starbucks to switch to using organic milk in its coffee beverages, and this coming weekend there is a planned social media swarm with calls for Starbucks to make this switch.

A press release from Thursday noted that some 150,000+ consumers were urging Starbucks’ CEO to switch to organic milk with a major social media push this coming Sunday. The release also said that tens of thousands more are expected to participate on Facebook, Twitter and Instagram.

What has not really been addressed and what will remain at least somewhat unknown and up for debate is what the price impact would be for Starbucks and consumers here. If a company the size of Starbucks made the switch to organic milk, it almost has to impact prices at Starbucks itself and also at the retail level outside of Starbucks. It is the “by how much?” where the devil may be in the details. Look at the “Anatomy of a Starbucks Beverage” image on page 2 at the end of this article and you will understand why this matters so much.

Another issue to consider is that Starbucks has dealt with soaring coffee prices already in 2014, with arabica futures up roughly 90% or so this year. Dow Jones data recently showed arabica coffee prices at $2.1375 per pound, the highest levels since late in April — with Brazil supply woes expected to continue ahead. To complicate matters further in determining what this would do to costs, Starbucks already raised its prices at the register by five cents to 20 cents per drink in the middle of 2014. Many other major coffee destination chains have raised coffee prices as well in 2014.

ALSO READ: What Express and Premium Store Launches Can Mean for Starbucks