Source: Thinkstock
Shares of Herbalife Ltd. (NYSE: HLF) may still be way down from when activist investor Bill Ackman first publicly went after the maker of vitamins and health products. Needless to say, the attacks caused serious declines in the share price after constant pressure to make the pyramid scheme argument case against the company. That being said, the shares also have bounced handily of late. It is impossible to know what the real outcome will be here. Still, some investors may be wondering if Herbalife shares have bottomed out.

24/7 Wall St. wanted to look at the chart and at recent news to see what the tea leaves are saying here. Ackman may have a very different tale than what the charts are saying, but charts do not really try to talk up their book.

In the outright war between Ackman and Herbalife, a decisive legal victory recently went in favor of Herbalife. A lawsuit was recently dismissed by a U.S. District Court for the Central District of California. Ackman reportedly has said that this does not exonerate Herbalife, but the continued rally in Herbalife shares was a sentiment vote in favor of Herbalife. The lawsuit claimed that shareholders lost money because Herbalife portrayed itself as a legitimate company when really it was a “pyramid scheme,” or Ackman’s favorite term, “criminal enterprise.”

The decision was handed down in a district court in Los Angeles. The presiding judge determined that not enough evidence was presented by shareholders to prove that Herbalife had inflated its stock price by misrepresenting itself.

Even before this announcement, Ackman went on a rant the prior week during his appearance on CNBC’s “Squawk Box,” when he again made his points against the company, very well known, that he did not see Herbalife going anywhere but down based on his assumptions.

Ironically, there was a rally in last Friday’s trading session that was due to the news of the government looking into whether the market or stock was manipulated. It was also interesting that the shares rallied in the face of Ackman’s rant.

Ackman has been fighting Herbalife for more than a year now. Unlike most activists who might try to take over a company or influence its decisions, Ackman has taken a short position and wants to ride it all the way to zero. If this occurs, it is supposedly for charity.

Herbalife released this statement in response to the ruling of the lawsuit:

Herbalife welcomes the decision by the U.S. District Court for the Central District of California to dismiss the case. As we have consistently stated, we are confident in the strong fundamentals of our business model and remain committed to helping people and communities improve their nutrition.

In terms of the stock’s movement, it gained about 8% to $35.96 the prior Friday after Ackman’s media rant and the government investigation. Following this, shares dropped only slightly and idled for Monday and Tuesday around $34. However, shares shot up 12.6% Wednesday to $38.76 on the news of the lawsuit. Shares were quiet on Thursday, but the big rally came on Friday — up almost 11% to $42.10, on over 6.2 million shares (more than double the normal volume).

The stock currently has a consensus analyst price target of $57.80 and a 52-week trading range of $27.60 to $69.69. So what are other measures indicating here? Herbalife’s short interest remains highly elevated at over 32.5 million shares. That short interest may be lower than the recent peak of over 33.7 million shares, but that is the second highest nominal official short interest for the past year. Also, options trading seems to be all over the place, at least on a layman’s review of the options trading volumes.

On a longer term basis than recent trading, the stock chart below should show some interesting trading patterns. After bottoming out just under $30 at the start of 2015, the stock has rallied and retested $30 to $31 on three separate occasions. Now this last rally took shares handily above the 50-day moving average for the first time since a similar pattern of a rally last October. The difference this time around was that the last rally of this sort was from a higher base and it peaked above $50. Now the stock is within a few dollars of the key 200-day moving average.

There are still negatives on Herbalife. It is still a highly controversial stock. There are still investigations that might or might not go in the company’s favor. New issues could arise, or key shareholders could decide to walk away. The company could also face a very hard time getting new sales recruits. The reality is that it remains a battleground stock.

The big question of whether Herbalife shares have bottomed almost certainly will depend on the news flow from the company and the legal and investigative efforts outside of the company’s control. That is just how these situations work out.

All things being equal, the difference of this bounce and prior efforts to bounce is that it is from a lower base — and this represents roughly a 50% bounce from the lows seen in early 2015.

ALSO READ: 6 Dream Mergers That Ought to Happen

In no way is this “both sides of the coin” review meant to imply that Herbalife shares will go back to their former highs anytime soon. That being said, a bounce of this magnitude is very difficult for technicians, and even the most bearish investors, to not wonder if things may have finally reached a turning point. 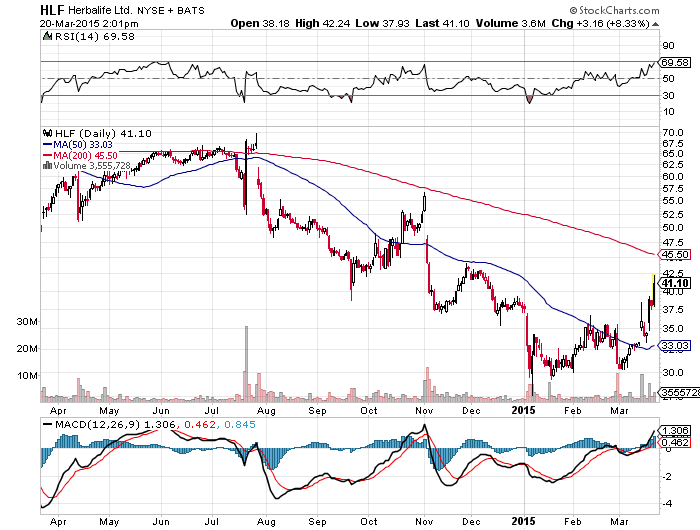 These Are the Places Your Thanksgiving Meal Comes From