It didn’t take much for a basket of cannabis stocks to lose between 5% and 9% in Friday trading. The magic word was “supply.” As in, not enough.

At least that’s true in Massachusetts, where legal sales of marijuana for recreational use rang up more $445 million in revenue for growers and distributors last year.

Canaccord Genuity analyst Bobby Burleson warned in a note to clients that the state faces a supply shortage in 2020, according to a report at MarketWatch. Burleson also said he expects pot sales in Massachusetts to reach $900 million in 2020. So, revenues are going to double even with a supply shortage? According to Burleson, “Wholesale weed prices are among the most expensive in the U.S., and are driven by the limited supply due to the scarcity of licenses.”

Pot prices in Massachusetts are already among the highest among the states that allow sales of pot for recreational use. According to Priceofweed.com, an ounce of high-quality marijuana costs nearly $340 in Massachusetts. The nearest state where legal sales are permitted is Michigan, where that same ounce of pot costs about $50 less. (Recreational sales have been approved in Maine and Vermont but haven’t started yet.) In nearby Illinois, where recreational sales began on January 1, an ounce costs just over $350.

Massachusetts also has a fairly strong hold on the Northeast and there are plenty of pot enthusiasts in New York who are willing to make the trek. That keeps supplies tight and prices high.

Aphria announced a strategic investment of C$100 million Friday morning at a 6% discount to Thursday’s closing price, so a large part of its price decline is related to that transaction. Aphria also made a few other costly mistakes last year.

Here’s a chart showing how the similarity in the performances of the pot stocks since January 2019. 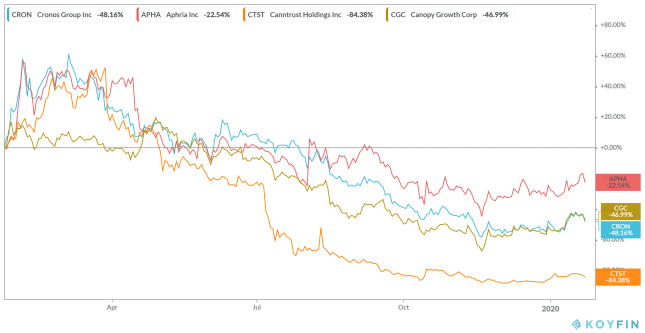 CannTrust’s miserable year was largely down to growing cannabis plants in unlicensed indoor facilities and trying to hide the fact from Canadian regulators. That cost the company its license to sell pot and forced it to destroy about $56 million worth of marijuana. The good news is the license was only suspended, not revoked.