The Next Crisis: People Don't Know How to Pay for Retirement Expenses!

Source: Thinkstock
It is of no surprise that the Great Recession had an impact on the retirement plans of many Americans. What is a shock though is just by how much. A component in the Federal Reserve’s Report on the Economic Well-Being of U.S. Households quantifies the number: roughly 40% of people 45 and over who were not yet retired have pushed back their retirement plans.

In how much (or any) contribution is being made, some 54% of those with incomes under $25,000 reported having no retirement savings or pension. This compares with only 10% of those earning $100,000 or more.

Another retirement scare is a tale you have heard, but this quantifies it. The Fed showed that although the long-term shift from defined-benefit to defined-contribution (from pension to 401(K) and IRA) plans places significant responsibilities on individuals to plan for their own retirement, only about one-fourth appear to be actively doing so.

Here is the true issue affecting many: they are clueless about their retirement! When asked how they and their spouse will pay for expenses in retirement, a whopping one-fourth of all respondents (and even 14% of those aged 45 or more) chose the answer “I don’t know.”

I don’t know. This is a scarier notion than improper planning — it is not having a plan at all.

We have outlined the full Fed household survey as well. 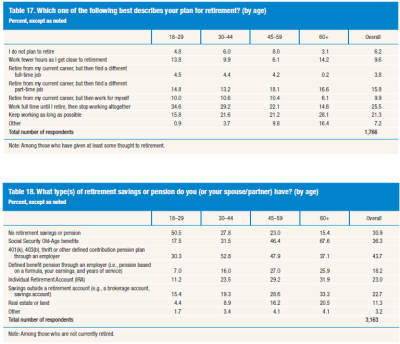 The State Where the Most the People Are Quitting Their Jobs