The Federal Reserve Bank of New York has released its Household Debt and Credit Report for the first quarter of 2017. While the economy has been recovering and while things feel better on the business front, there are some very troubling internal metrics when it comes to debt levels and delinquency rates.

According to the report, household debt has now reached an all-time high. Gains in mortgage debt, auto debt and student debt were all cited. This all-time high now stands at $12.73 trillion and was $149 billion higher than in the fourth quarter of 2016. What stands out here is that it is about $50 billion above the previous peak reached back in the third quarter of 2008 — right before the recession kicked into overdrive.

While the New York Fed showed that aggregate delinquency rates were roughly flat in the first quarter of 2017, some 4.8% of outstanding debt was listed as being in some stage of delinquency. Of that total, $615 billion of debt listed as is delinquent, some $426 billion is listed as seriously delinquent — at least 90 days late or “severely derogatory.”

It may sound impressive that credit card balances were actually down by 1.9% (by $15 billion) in the first quarter, but there is a seasonal aspect to that component and there are some troubling signs on the internal credit card metrics. Of the $764 billion in credit card balances as a whole, the credit card with 90 or more day delinquency rates deteriorated and they now stand at 7.5%.

It was shown that early delinquency flows have improved since the recession, but there has been a slow deterioration in auto loan performance and a more recent uptick in early delinquency rates on credit card debt.

On student debt, the percentage of student loan balances that transition to serious delinquency has remained high, around 10% and that has been the case over the past five years.

Bankruptcy notations and credit inquires also have to be considered here for the full picture. Some 203,000 consumers had a bankruptcy notation added to their credit reports in the first quarter of 2017, which is 1.7% lower than a year earlier, and the New York Fed called it another record series-low. The number of credit inquiries within the past six months, which the New York Fed calls an indicator of consumer credit demand, declined from the previous quarter to 162 million. 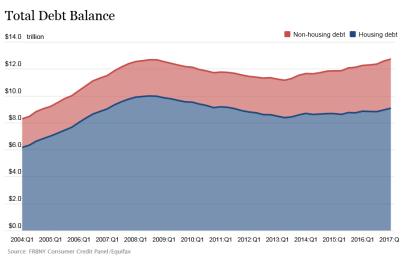 This Is America's Most Dangerous State