In its monthly report on the energy industry, the Federal Reserve Bank of Dallas reported on Monday that employment in the energy business is rising, prices are rising, rig counts are rising and inventories are falling. This would appear to be a perfect storm for Texas oil producers to cash in after a year or more of constrained profits.

Unfortunately, as with most things related to the energy business, it’s not that simple. The Dallas Fed noted that spot prices for West Texas Intermediate (WTI) crude oil rose to about $66 in April, up $3.42 month over month.

The main driver of the price increase was an increase in the risk premium based on geopolitical concerns like the strife in Yemen, higher levels of turmoil in Libya, U.S. airstrikes in Jordan, a potential U.S. trade war with China and uncertainty about the U.S. position on the nuclear deal with Iran. The bank’s analysts also noted that falling inventory levels in developed nations, continued OPEC compliance with production cuts and lower production from Venezuela “continue to be supportive” of higher prices.

Texas producers, however, are not reaping all the benefits of the price hikes. The discount between the price of benchmark Brent crude and WTI produced in the Permian Basin widened to nearly $11 a barrel in April, the largest monthly spread in nearly four years. Brent barrels sold for $72 in April while Permian crude sold for $61 a barrel.

The issue is pipeline takeaway capacity. Fed analysts say that pipeline capacity is not yet hobbling production growth but that could change sometime between the middle of this year and the middle of next year if new pipelines do not come online.

The bank’s analysts produced the following chart showing expected production growth (the solid and dotted black line) plotted against existing pipeline capacity, pipelines under construction, and pipelines on the drawing board. Capacity remains tight until sometime in mid-2019, and that happens only if the speculative capacity is added as drawn up. 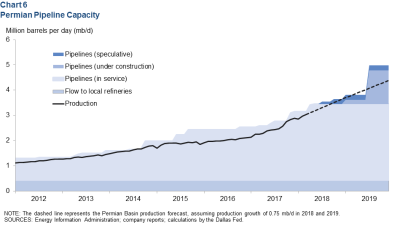 For large producers that have firm, long-term takeaway capacity, this is not a big deal. Smaller producers already feel the pinch and are using both railcars and trucks to transport crude.

We would also note that much of the Permian’s takeaway capacity moves the crude to Cushing, Oklahoma, the traditional U.S. pricing point for WTI. Takeaway capacity to Houston and Corpus Christi, where the crude can be loaded onto tankers for export at higher prices, is far more constrained. Some producers are paying rail transport costs of $6 to $8 per barrel and trucking fees averaging about three times that to move crude to Houston and Corpus Christi.