If you listened to certain factions of mainstream media, the tariffs against China might have you fearing that a full-blown recession is coming on the back of an all-out trade war. Apparently, consumer sentiment is seeing past the tariffs to at least some degree.

That said, the report is so strong that the investing community probably should assume that the refreshed numbers at the end of the month may be a bit less aggressive.

The University of Michigan’s Index of Consumer Sentiment managed to post a more than five percentage point gain in the preliminary May reading from April’s final reading. That went to 102.4 from 97.2, and surprisingly it was the highest level in 15 years. Dow Jones (WSJ) was calling for a 0.2-point drop to 97.0, and Econoday’s consensus estimate was for a 0.3-point rise to 97.5.

According to the May report, all of May’s gain was seen in the Expectations Index. This rose to 96.0 from 87.4 the prior month, and the expectations component was suddenly at its highest level since 2004. The Current Conditions Index ticked up by only one-tenth of a point to 112.4.

The Survey of Consumers does warn that most of the gains were seen prior to the trade talks with China collapsing, which should put an asterisk on the report and likely will set up the report for a strong downward revision if there is no deal or ease in trade tensions in the next week or so.

As shown in the chart, unaided references to tariffs peaked in July 2018 at 35% and have generally declined to just 16% in early May 2019. The July peak corresponds to the initial imposition of tariffs. To be sure, negative references to tariffs rose in the past week and are likely to rise further in late May and June. Those who held negative views about the impact of tariffs on the economy and pricing had values on the Expectations Index that were 25 points lower, and expected the year-ahead inflation rate to be 0.6 percentage points higher. Even apart from the direct impact of tariffs on prices, rising tariffs could cause a more general loss of confidence which could further diminish the pace of consumer spending. At present, the data point toward moderate spending growth in the year ahead. Nonetheless, the data indicate the corrosive impact of an escalating trade war. 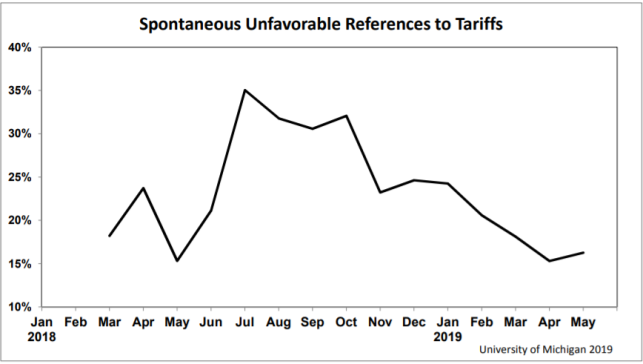