At the current pace of demand growth for oil and the current fiscal position of the six Middle Eastern countries comprising the Gulf Cooperation Council (GCC), the region’s financial wealth could disappear by 2034, according to a new report from the International Monetary Fund (IMF).

The member nations of the GCC are Bahrain, Kuwait, Oman, Qatar, Saudi Arabia and the United Arab Emirates. Together they now account for more than 20% of the world’s total production of crude oil of nearly 101 million barrels a day, according to the most recent U.S. Energy Information Administration’s (EIA) Short-Term Energy Outlook.

The IMF report, “The Future of Oil and Fiscal Sustainability in the GCC Region,” addresses three issues: the long-term outlook for oil production, what that outlook implies for public finance in the GCC and what can the GCC countries do to guarantee their long-term fiscal sustainability.

The short answers are: oil demand is expected to peak by 2040; a decline in demand for hydrocarbons will add to a decline in GCC wealth, depleting it entirely by 2034; and long-term fiscal health “requires” that average annual non-oil primary deficits decline from a current level of 44% of non-oil GDP the mid-single digits by 2060.

Looking first at the long-term outlook for oil, the IMF cites increased availability and substitute energy sources as the “two fundamental changes that will arguably shape the long-term future of oil.” Increased availability is largely due to horizontal drilling and fracking in North America, with new discoveries of proved reserves have “significantly augmented both current and future potential global oil supply, obviating fears of oil depletion which prevailed in earlier decades.”

The rise of alternatives to oil “is expected to become more prominent and could significantly accelerate with faster innovation and stronger regulatory push for environmental protection.”

Using EIA data, IMF estimates and data from consultancy Rystad Energy, the IMF report expects total U.S. production to plateau at nearly 16 million barrels a day and remain there out through 2050. Global proved reserves totaled around 475 billion barrels in 1998 and about 515 billion barrels in 2017, even though well over 100 million barrels had been extracted in the period between 1998 and 2017. In other words, there’s still plenty of the stuff in the ground, both to be extracted and to be found. 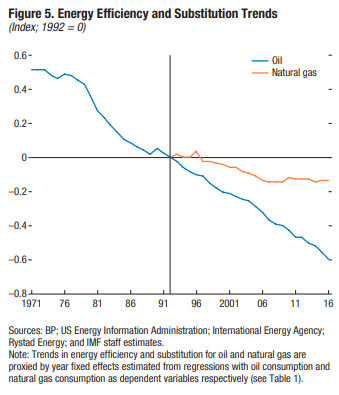 A growing population and rising wealth are often associated with an ever-increasing demand for energy. The chart from the IMF report makes clear just how energy efficiency and substitution effects have reduced the global demand for oil.

Population growth is slowing, and as emerging nations get wealthier, their demand for oil will decline, not rise to support that rising wealth. Here’s what that means for future decades:

For GCC nations rich in natural gas (Qatar, Oman and Saudi Arabia, in particular), hydrocarbon-related GDP will peak about a decade later, according to the IMF, barring further efficiency gains or a worldwide carbon tax. GCC countries would benefit from rising market share, but the market would be far smaller and the share of GDP attributable to hydrocarbons would fall from 20% today to around 10% by 2050.

The IMF notes three steps for GCC nations to consider in order to accelerate and sustain long-term adjustment to a long-term demand drop for hydrocarbons. First, countries need to increase their non-oil fiscal revenues and do it quickly (taxes, for example). Second, governments need to get smaller. Third, encourage more savings to replace the public investment that has come from oil profits.

Managing the transition from a hydrocarbon-based economy to one that is more broad-based “would have a multitude of socioeconomic consequences affecting employment, household incomes, and business confidence and investment.” The GCC is moving in the right direction, according to the IMF, but it needs to speed up the changes. In other words, the GCC had better up its game.

ALSO READ: Why 4 Coveted REITs May Be Among the Safest 2020 Income Vehicles
Get Our Free Investment Newsletter