Despite Pandemic, US Colleges and Universities Raise Nearly $50 Billion in 2020

Nine American research universities had endowments totaling more than $10 billion at the end of 2019. Those endowments grew slightly in 2020 even as total philanthropic giving to U.S. institutions of higher education dipped by about 0.2% from $49.6 billion to $49.5 billion.

Johns Hopkins raised $1.5 billion last year to top the league tables. Stanford ($1.4 billion) and Harvard ($1.2 billion) were the only other institutions to attract more than $1 billion in total giving in 2020.

The data was reported Tuesday by the Council for Advancement & Support of Education (CASE). Ann Kaplan, CASE’s survey director, told Bloomberg, “Without the pandemic, giving probably would have been up and been a very good year.”

Because the institutions that raise the most are generally private, nonprofit research universities with high tuition rates, restricted gifts to a school’s endowment for financial aid comprised about 40% of the 2020 total. Including all public and private institutions, the largest portion of the restricted total, almost a full third, was directed at research. Gifts restricted for student aid accounted for nearly 11% of total 2020 giving.

Billionaire Mackenzie Scott, former spouse of Amazon CEO Jeff Bezos, announced total giving of more than $800 million to higher education last year, and those gifts will be counted in the CASE survey for 2021. Scott’s giving was directed primarily at historically Black colleges and universities, tribal institutions, institutions that serve primarily Hispanics and small public institutions. Netflix CEO Reed Hastings and his wife contributed $120 million to two historically Black colleges and to the UNCF in late 2020.

CASE noted that, while giving to higher education increases when equity markets are strong, “a donor’s experience of personal affluence and ability to give is affected by the performance of the market” even when the economy is in a recession. The following chart from the CASE report tracks voluntary giving to institutions during good times and bad. 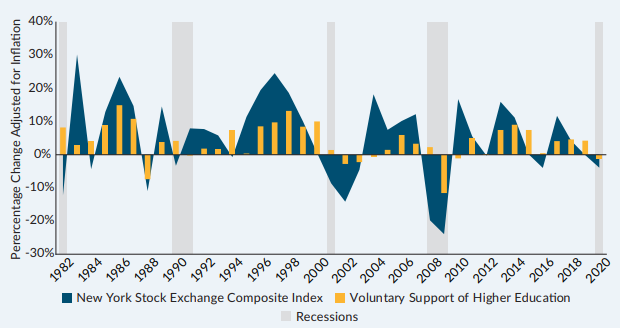 This County Has the Worst Drug Problem in America

Half the People in This State Are Not Working