Partners TransCanada Corp. (NYSE:TRP) and Exxon Mobil Corp. (NYSE:XOM) have announced the beginning of a three-month open season for capacity on the proposed Alaska Pipeline. The pipeline, if its built, would carry up to 4.5 billion cubic feet of natural gas daily from Prudhoe Bay on Alaska’s North Slope to either a connection to TransCanada’s existing pipeline system in Alberta or to Valdez, Alaska, where a new LNG plant would be constructed to convert the gas to a liquid and then put it on LNG tankers for distribution. Here’s a map of the proposed Alaska Pipeline. 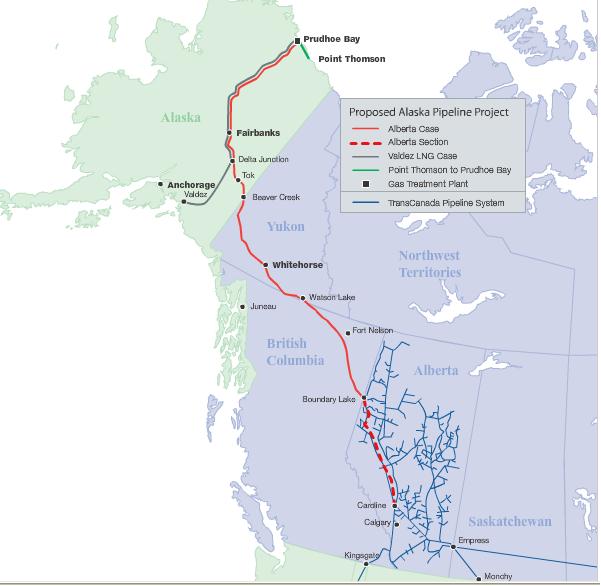 An open season is essentially a pre-bidding auction that pipeline companies use to assess interest in a proposed pipeline. Companies that plan to extract natural gas from the North Slope are being asked to indicate how much pipeline capacity they would contract for if the pipeline were built. A competitive proposal from a consortium consisting of BP plc (NYSE:BP) and ConocoPhillips Corp. (NYSE:COP) has already initiated an open season ending in October on a competing pipeline, called the Denali Pipeline, that is proposed as an alternative to the Alaska Pipeline. Only one pipeline is likely to be built.

There is an estimated 8 trillion cubic feet of gas offshore of Alaska’s North Slope that would be shipped on the winning pipeline system. The Denali Pipeline is estimated to cost about $35 billion, while the Alaska Pipeline estimate has come in at $32-$41 billion. Both routes to Alberta are about 1,700 miles long and the both would use 48-inch diameter pipe to deliver about 4.5 billion cubic feet of gas/day. If the route to Valdez is chosen, the pipeline would be about 800 miles long, but would include a costly LNG train at the terminus in Valdez.

When the US natural gas market is flooded with gas from shale plays in the lower 48 states, it seems frivolous to consider spending billions of dollars for a pipeline that may not be filled for years. But BP, Conoco, and Exxon own the leases to virtually all the North Slope gas, and if they don’t develop them, the leases could be lost. None of the companies wants that. Better to build the pipeline now and have it in hand when the time comes that the shale gas plays are exhausted.

The state of Alaska, of course, wants a pipeline to be built as soon as possible to tap the revenue the state will get as oil production in Prudhoe Bay declines. Construction on the gas pipeline is not likely to begin until about 2016, and TransCanada has estimated that its pipeline would be ready to ship gas by 2020. The state supports the TransCanada/Exxon pipeline because that proposal has fallen in line better with the state’s demands.

It will take months after the open seasons close to sift through the proposals from potential shippers, and to convert those promises to firm contracts. Then, of course, will come the inevitable delays caused by opponents of any more pipelines along Alaska’s North Slope.

What is also inevitable is that a pipeline will be built. There’s too much gas there to just leave it stranded. And natural gas, which produces about half the carbon emissions of coal, is far more likely to have an impact on reducing emissions than any other fuel because there is so much of it and we know how to extract and transport it and use it for a transportation fuel.