Earlier this year Pioneer Natural Resources Co. (NYSE:PXD) said that it was seeking bids from potential partners to develop its holdings in the Eagle Ford shale gas play in south Texas. At the time, a prime suspect to partner with Pioneer was Chesapeake Energy Co. (NYSE:CHK). Chesapeake had been selling off non-core assets to raise cash to pay down its massive debt, but a relatively small investment in Eagle Ford could have paid off nicely for the company. France’s Total SA (NYSE:TOT) had first rights on an investment in Eagle Ford from an earlier deal with Chesapeake, but the French company demurred. So, apparently, did Chesapeake.

India’s Reliance Industries has agreed to invest $1.15 billion in a joint venture with a subsidiary of Pioneer in exchange for a 45% interest in 212,000 net leased acres in the Eagle Ford play. Reliance paid $1.7 billion in April to Atlas Energy, Inc. (NASDAQ:ATLS) for a 40% stake in Atlas’s acreage in the Marcellus shale play.

Chesapeake chose instead to issue preferred stock worth $900 million to sovereign wealth funds from China, Korea, Singapore, Japan, and Abu Dhabi, as well as to private investors. This stock issue follows on a $1.7 billion preferred stock sale in May. Chesapeake has shed or agreed to share more than $12 billion in assets in the past couple of years to pay down long-term debt of more than $12 billion.

Not to be outdone, China’s national oil company, China National Petroleum Company, has signed an agreement with Canada’s Encana Corp. (NYSE:ECA) under which the Chinese company will “invest capital to earn an interest in the assets and gain an advanced understanding of unconventional natural gas development through an ongoing sharing of technical knowledge.” The amount of the investment was not announced, but the proposed joint venture is expected to develop Encana’s properties in northeast British Columbia.

Both the Reliance and CNPC investments indicate that developing countries are as interested in gaining technical knowledge as much as they are in making a profit. The booming US shale gas industry has raised hopes that similar deposits that are thought to exist in many other areas of the globe can be developed using techniques pioneered in the US.

The International Energy Agency estimates that China sits on about 26 trillion cubic meters of shale gas that the country is not capable of extracting because it doesn’t have the knowledge. And rather than selling off its resource, the Chinese government has decided to spend some cash for on-the-job training.

There are calls for the Indian government to begin an official survey to locate shale gas in that country, and shale gas deposits have been found in Eastern and Western Europe. The stuff is everywhere, and the technology for getting it out of the ground belongs to US producers.

The following map provides some estimates of shale gas deposits. For reference, one cubic meter equals about 35.3 cubic feet. 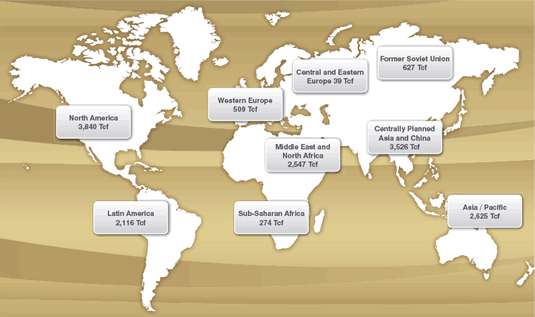 Shale gas may also shift the geopolitical balance. The countries with the largest deposits of conventional natural gas are Russia, Qatar, and Iran. Widespread shale gas discoveries of significant size means that Eastern and Western Europe should be able to reduce their dependence on Russian natural gas, which now provides 25% of the continent’s supply. Qatar has invested heavily in LNG production, with significant funds also coming from big oil.

China has committed significant funding to its naval capabilities because the government believed it needed to protect the sea lanes between the Persian Gulf and China for both crude oil and LNG deliveries. If the country substitute domestic shale gas, the expressed reason for the Chinese naval buildup diminishes.

Finally, if shale gas is as widely spread as believed, natural gas could become a transition fuel to generate electricity, replacing coal. Natural gas emits about half the CO2 of coal. While this is not zero, it’s a substantial improvement.

Investments in US shale gas plays and players are likely to become more common, especially for smaller companies with leases in producing fields. Prices for natural gas, although currently rising, are also likely to remain under long-term pressure due to the huge volumes of gas being produced from the shale plays.