Federal  Judge Martin Feldman has pushed the Obama administration to resume drilling in the Gulf of Mexico ever since late June 2010. That’s when he first ruled against the moratorium on drilling ordered by the administration after the spill and explosion at the Macondo well owned by BP plc (NYSE: BP) which killed 11 workers. The US Department of Interior made some changes to the moratorium rules, and re-instated it. The moratorium ended in October, but no deepwater drilling has resumed because the Bureau of Ocean Energy Management, Regulation, and Enforcement (BOEMRE) says the drilling companies have not yet shown that they have the technology to control deepwater wells or reliably to contain the oil that would be discharged in the event of a blowout.

Now, Judge Feldman has ruled that the federal government has 30 days to act on five applications for drilling permits from Ensco plc (NYSE: ESV). On the judge’s side, a consortium called the Marine Well Containment Company that was formed to create a response plan for a major spill in the Gulf announced that it has an interim plan ready to go.  The five oil companies, Chevron Corp. (NYSE: CVX), Exxon Mobil Corp. (NYSE: XOM), ConocoPhillips Corp. (NYSE: COP), Royal Dutch Shell plc (NYSE: RDS-A), and BP, announced the plan yesterday. Helix Energy Solutions Group, Inc. (NYSE: HLX) is developing a similar system.

Most politicians and industry associations are eager to get Gulf exploration started again. The New York Times cites the president of the National Ocean Industries Association, “…the time to begin issuing permits is now. The court has spoken — the containment technology is there.”

That’s not exactly what’s happened. Judge Feldman’s ruling is based on his determination that the Department of Interior needs to act on permit applications in a reasonable amount of time. He did not say anything about the efficacy of new containment technology.

The Marine Well Containment Company said that BOEMRE has witnessed a functional test of its interim solution, which works in water up to 8,000 feet deep at well pressures up to 15,000 pounds/square inch, and is capable of capturing 60,000 barrels of fluid/day. The company is also working on an expanded system that would work in depths up to 10,000 feet and have the capacity to capture 100,000 barrels/day of liquid. Here’s an illustration of the interim system. 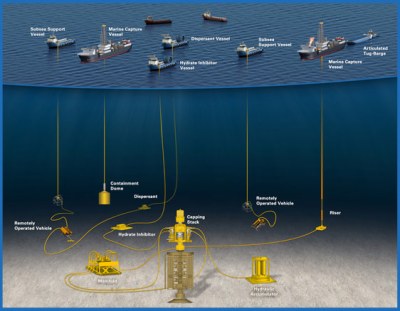 As we’ve noted elsewhere, the latest report on the Gulf disaster amounts to nothing more than a me-too document that adds nothing to understanding what happened at the Deepwater Horizon or where the blame lies for that disaster.

Judge Feldman clearly didn’t care last June whether we knew what caused the blowout, and he doesn’t care now. The judge just wants the drilling to start up again. And so does the National Commission that issued the latest report on the Deepwater Horizon disaster. What most of us want is a steady supply of oil as cheaply as we can get it. Gulf of Mexico drilling will resume very soon now.