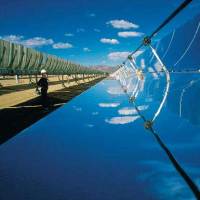 Stock prices for the solar PV makers have fallen by -40% to -80% in the past 12 months, with the bulk of the crash occurring since May. The collapse is due to an oversupply of manufacturing capacity that was predicted almost exactly a year ago. The solar makers have stopped being viewed as growth stocks, but are they really as bad as their current share prices would lead one to believe?

As panel prices continue to decline, inventories continue to build as orders from Europe continue to slide. A year ago European markets accounted for 78% of global demand for modules in the third quarter; this year the Europeans accounted for an estimated 58% of demand. Demand in China and the US has grown, but not fast enough to make up the difference. As a result, module prices are now down to about $1.09/watt for crystalline solar-based modules.

As investors have re-set their growth expectations for the solar makers, share prices and earnings estimates have tumbled. It had to happen some day, but the punishment seems excessive. It’s as if investors are crushing the shares now because they couldn’t bear to believe the projections on over-supply that started coming out last year.

LDK and Trina have been hit with some accounting issues, and JA Solar and Suntech have overbuilt capacity. Sunpower’s share price was boosted by Total’s investment, not on anything organic to Sunpower’s operations.
Only First Solar has stayed close to its EPS estimates of three months ago. The estimate is down by about -6% while the share price has dropped by nearly -50%. That seems like a bit of overkill.

First Solar appears to be getting punished for being the best house in a bad neighborhood. SunPower’s rise had little to do with its operations, so its fall is less surprising. The low-cost Chinese makers made their choice to expand a year ago and couple with their accounting issues probably deserve the black eye they’re getting now.