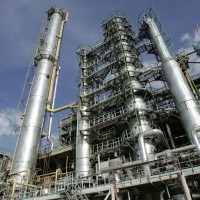 This morning’s report from the US Energy Information Administration (our coverage here) showed that commercial crude oil inventories in the US rose by 4.2 million barrels last week. At the same time, inventories of gasoline fell and crude oil imports rose. The rise in imports could be the result of the decline in refined products, but more likely is that the imported crude is being refined and the refined products are being exported.

Valero operates six refineries along the US Gulf Coast; Marathon, BP, and Chevron operate one each; and Exxon operates four. Neither Tesoro nor HollyFrontier has a refinery on the Gulf Coast. Crude at Gulf Coast refineries is priced at the Brent crude import price, no matter where it comes from. Refineries in the US interior are typically able to get the vast majority of their crude at or below domestic the WTI crude price. Today, a barrel of Brent costs about $121, and a barrel of WTI costs about $106. That $15 difference in feedstock pricing pays dividends at the refinery.

The secret to making a profit in refining these days is for refiners to source crude oil domestically and then sell the refined products to US consumers at prices based on imported oil. Valero can’t do that, but Marathon, Tesoro, and HollyFrontier can.

Valero’s shares have fallen by more than -8% in the past 12 months. The company’s consensus target price is $29 and the shares are trading today at $24.63, for an potential upside of 17.7%. Valero’s stock has risen 17% since the beginning of the year, coinciding with the increase in crude prices. High prices for Brent are good for Valero.

Marathon’s shares have risen by more than 7% in the past 12 months. The company’s consensus target price is $51 and the shares are trading today at $41.85, yielding a potential upside of almost 22%. Marathon gets about 70% of its crude from the US and Canada, which is undoubtedly the reason its shares have jumped nearly 26% since the beginning of the year.

HollyFrontier’s shares are up almost 18% over the past 12 months. The company’s consensus target price is $35.69 and shares are trading at $32.72 today, for a potential gain of 9%. Since the beginning of the year, shares are up nearly 40%. HollyFrontier stock appears to be fully valued, but if the differential between Brent and WTI crudes should widen, the company’s share price could climb right past the current target.