Is the Keystone XL Pipeline Dead? 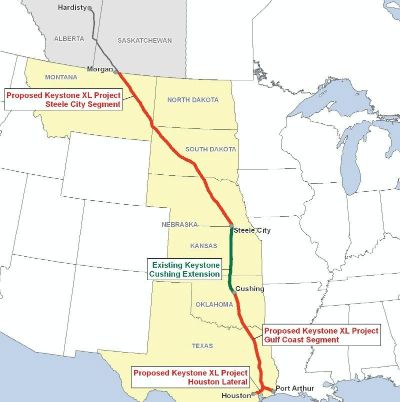 Source: courtesy U.S. State Department
The Keystone XL pipeline will not be built. And while the environmentalist arguments against the pipeline had a significant impact in delaying construction of Keystone XL, the primary reason it will not be built is because it really isn’t needed any longer.

That is not entirely so. TransCanada Corp. (NYSE: TRP), the owner of the proposed pipeline, obviously wants to build the Keystone XL, and Suncor Energy Inc. (NYSE: SUN), Total S.A. (NYSE: TOT), Cenovus Energy Inc. (NYSE: CVE) and ConocoPhillips (NYSE: COP), among many others, face some difficult problems getting their production to markets without the massive pipeline. But there have to be winners and losers in every fight, and these are the losers.

In its Drilling Productivity Report issued Friday, the U.S. Energy Information Administration (EIA) projects that crude production from the Bakken shale play in North Dakota and Montana will top 1 million barrels a day in December. The Keystone XL has been designed to transport 830,000 barrels a day from Alberta to U.S. Gulf Coast refineries, with some capacity devoted to crude from the Bakken region. However, the delay in getting construction started has obviated the need for the pipeline as rail transport has filled the need for getting Bakken production to refineries on all three U.S. coasts.

You are not hearing from Gulf Coast refineries that they need more crude because they already have all they can profitably refine. If Keystone XL were to be built, that crude would very likely be re-exported. Politically, using the entire breadth of the U.S. to transport Canadian crude to foreign markets will be a very hard sell.

The argument over the number of jobs created by the Keystone XL’s construction no longer carries much weight either. During the two-year construction period, a total of about 8,000 to 10,000 full-time jobs would have been created and then disappeared. The economic boost to towns along the route would have been significant, but that was a more important issue two or three years ago than it is now.

Shipments of petroleum and petroleum products by rail in the United States are up 33.6% year-over-year through last week. A total of nearly 607,000 carloads of crude and refined products have been shipped by rail in the U.S. this year, and more rail terminals are being constructed every day to accommodate booming production from the Bakken.

A political fight over the Keystone XL simply will not happen. The president does not need another battle, and his political opponents are running out of allies. Furthermore, President Obama can score some big points with environmental voters for the next Democratic presidential nominee by rejecting the pipeline. There is no upside for any national politician or political party to go down with the Keystone XL ship.

The death of the Keystone XL does not mean that no more pipelines will ever be constructed in the United States. There are any number of opportunities for shorter pipelines that fill a specific need, but Keystone XL is very likely to be the last gargantuan project ever proposed.

Once the Keystone XL is officially pronounced dead, the environmentalists will proclaim victory and will use the victory to redouble their efforts to cut dependence on fossil fuels. That is a long-run issue, and as Americans become better acquainted with the effects of climate change, demand for fossil fuel will continue to fall.

In effect, everyone except Transcanada Corp. (NYSE: TRP) and the companies with large stakes in the oil sands win when Keystone XL is rejected. The refiners no longer need or want the oil, environmentalists never wanted the pipeline in the first place and President Obama can focus on getting his health care program working.