Russian Sanctions Force Exxon to Pull Out of Arctic Project 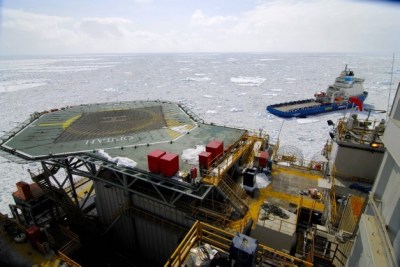 Source: Courtesy Rosneft
Last Friday, Exxon Mobil Corp. (NYSE: XOM) issued a terse statement that the company has received a license from the U.S. government that allows the company to continue working in Russia while it shuts down its first project under a deal signed more than three years ago. Russia’s energy industry had avoided sanctions placed on the country by the U.S. and Europe as a result of the Russian incursion into Ukraine.

Under the latest round of sanctions, foreign oil companies are barred from providing equipment, technology, or assistance to Russian firms to support deepwater, offshore, or shale projects. Because Russia has not developed significant expertise in these areas yet, the ban effectively brings such projects to a grinding halt.

Another new sanction against the Russian oil companies — Gazpromneft, Transneft, and Rosneft — forbids European banks from lending to the companies on maturities of more than 30 days. Russia’s five state-controlled banks, which have been allowed to raise funds on maturities up to 90 days, will also see their maximum maturities cut to 30 days.

Exxon Mobil Corp. (NYSE: XOM) formed an alliance with Russia’s state-controlled oil giant OAO Rosneft in 2011 to develop the potentially huge and so-far untapped reserves on Russia’s Arctic Shelf and in Western Siberia’s shale oil deposits. The deal could eventually be worth as much as $500 billion. Part of the deal included exploration work in the Black Sea, but the big prize is the Arctic. Exxon was able to persuade Russian President Vladimir Putin to cancel taxes on oil exports from the Arctic for up to 15 years in exchange for its investments in the country.

Here’s the text of Exxon’s announcement:

The U.S. Treasury Department, recognizing the complexity of the University-1 well and the sensitive Kara Sea arctic environment, has granted a license to ExxonMobil and other U.S. contractors and persons involved to enable the safe and responsible winding down of operations related to this exploration well. The license recognizes the need to protect the safety of the individuals involved in these operations as well as the risk to the environment. All activities related to the wind down will proceed as safely and expeditiously as possible.

Because the project is in its early stages, Exxon loses no revenue. However it does lose time, and time will end up costing the company money down the road.