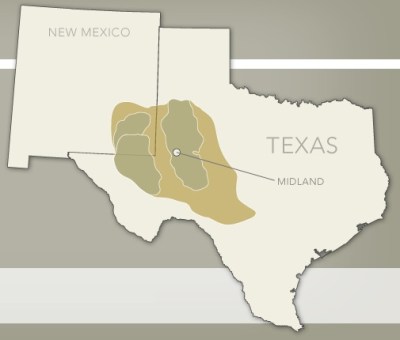 Source: courtesy of Concho Resources Inc.
The Permian Basin is one of the most productive oil regions in the country and has been for decades. The basin covers 59 counties in west Texas and two counties in southeastern New Mexico in an area about 250 miles wide and 300 miles long. According to the Texas Railroad Commission, which despite its name regulates the oil patch in the state, the Permian Basin has produced more than 29 billion barrels of oil and 75 trillion cubic feet of natural gas in its more than 90-year history, and there are even more resources available for extraction.

Through most of its history the Permian has produced oil and gas from vertical wells, but since about 2009 or 2010, it has been producing from the tight shale formations that require horizontal drilling and fracturing. The Permian already produces more oil than North Dakota’s Bakken, and by the end of the decade is expected to surpass the Eagle Ford shale play in south Texas as the most productive unconventional oil play in the country, with about 1.8 million in crude oil production every day.

There are half a dozen main players in the Permian Basin, and we have taken a closer look at five of them. The sixth, Chevron Corp. (NYSE: CVX), is an integrated oil company (it owns refineries) and does not really fit in well with these pure-play producers.

Occidental Petroleum Co. (NYSE: OXY) reported acreage in its Permian Basin Resources operations of 1.9 million acres at the end of 2013. Of the 345 horizontal wells Oxy planned to drill in 2014, 172 were targeted at the Permian Basin. The company’s average daily production of crude oil totaled about 153,000 barrels a day at the end of 2014, up by about 2% year-over-year. The average realized price for all its U.S. barrels, however, dropped from $104.30 to $90.57 year-over-year for the third quarter.

Apache Corp. (NYSE: APA) reported 2013 production of around 90,000 barrels a day from its Permian Basin operations. The company holds leases on 1.7 million net acres in the Permian and estimates its undeveloped reserves at 5 billion barrels. Apache is focused on two areas of the Permian Basin: the Barnhart area of the Wolfcamp play and the Southern Midland Basin. In a presentation to investors and analysts in November, Apache said it planned 50 wells for the Barnhart area (using four rigs) and 115 wells (using nine to 12 rigs) for the Southern Midland Basin.

At the end of the third quarter Apache reported a realized price per barrel of oil in the United States of $91.26, down from $105.82 in the same period a year ago. Reported operating expenses totaled $67.55 per barrel in the quarter, up from $47.75 a barrel in the third quarter of 2013. The majority of the difference was due to a non-cash writedown of $1.5 billion ($26.65 per barrel) to reflect a drop in the carrying value of its U.S. and North Sea assets. That impact is likely to be even higher in the fourth quarter, when crude prices fell the most.