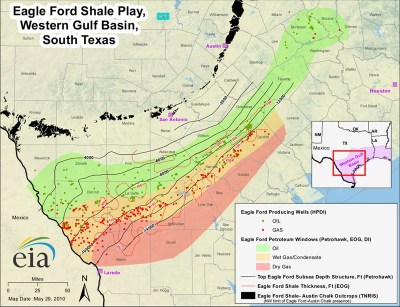 Source: U.S. Energy Information Administration
In just the six years since 2008, crude oil production in the Eagle Ford shale play in south Texas has grown from 352 barrels of oil a day to more than 1.6 million barrels a day. The play runs from south Texas northeastward into east Texas and is about 50 miles wide by 400 miles long, with an average thickness of 250 feet at depths ranging from 4,000 to 12,000 feet. The play, which is part of the larger Western Gulf Basin, currently includes 22 active fields in 26 Texas counties.

The field does not stop at the U.S.-Mexico border, but extends south in Mexico’s Burgos Basin and is believed to hold about two-thirds of Mexico’s shale gas resources. As much as 600 trillion cubic feet of recoverable natural gas and 13 billion barrels of recoverable shale oil could lie in Mexico. The country’s national oil company, Pemex, has neither the funds nor the expertise to develop the play and with the opening of the company’s oil industry to foreign companies, it’s just a matter of time (and energy prices) before exploration begins in Mexico’s shale.

The Eagle Ford is the second-most productive field in the United States, yielding more than 1.6 million barrels of oil a day, compared with 1.8 million in the Permian Basin and about 1.2 million in North Dakota’s Bakken field. The U.S. Energy Information Administration (EIA) expects production at the Eagle Ford to top 1.7 million barrels a day by the end of February, with new wells averaging production growth of 566 barrels a day over the 558 barrels a day of growth in January. That projection takes into account a slightly lower rig count.

One of the great benefits of the Eagle Ford play is its location with respect to the refining capacity around Houston and Galveston. Pipeline transportation is tight but not inadequate, as has been the case in the Permian Basin, or nearly non-existent, as in the Bakken play. Another advantage for producers is that Eagle Ford crude is priced against Louisiana Light Sweet (LLS) crude oil, which trades closer to the price for Brent crude than the price for West Texas Intermediate (WTI), primarily because the Gulf Coast is the landing port for most of the crude oil imported into the United States.

Here is a look at the Eagle Ford’s top five companies, based on the best production numbers we can find.

Holding the largest leased acreage position in the Eagle Ford play with 632,000 net acres, EOG Resources Inc. (NYSE: EOG) has a market value is around $47.7 billion. The country’s third-largest natural gas producer is the play’s largest oil producer as well, with about 170,000 barrels a day. Adding in natural gas and natural gas liquid (NGL) production, the company produced about 220,000 barrels of oil equivalent (boe) a day from the Eagle Ford, out of its third quarter total U.S. production of 275,000 boe a day. Based on its 656 drilling permits, the company is also the big dog among Eagle Ford drillers, with more than 100 more permits than the number two permit holder.