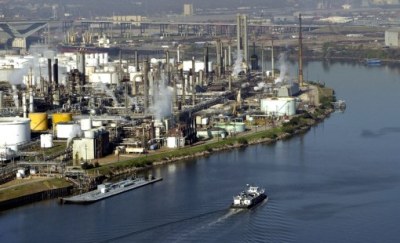 Source: Wikimedia Commons
The master limited partnership (MLP) sector within oil and gas has been battered. The group was originally hoped to be immune to oil and gas prices, but even the largest MLPs in the country have seen the price of their units sell off handily. Most of the largest companies have even addressed their price exposure to some degree.

Now Fitch Ratings has warned that continued pressure in the commodities could impact the available funding for the MLP sector. This comes at a time when the Alerian MLP Index is still down by more than 20% so far in 2015.

24/7 Wall St. has looked at some of Fitch’s warnings, and we have pointed out moves elsewhere that support some of the same concerns brought up by Fitch.

Commodity prices continue to weigh on midstream issuers, and the ability and willingness to fund capital spending with equity is becoming a more prominent concern for issuers. Fitch said:

Access to capital markets remains intact despite the rising cost of capital. We believe access to markets could deteriorate as commodity and equity prices continue to languish and potential interest rate increases from the U.S. Federal Reserve loom… Overall capital market access and cost of capital is a growing focus. A potential increase in the cost of capital would create higher hurdle rates for projects and acquisitions to be profitable and could result in projects being pushed out or canceled, although capital spending backlogs currently remain largely intact.

Here is why this matters so much: Fitch showed that midstream issuers have raised over $41 billion in capital so far in 2015, and that was through July 24. The fear is that MLPs’ access to the debt market could also contract as interest rates rise. It is the lower-rated midstream and MLP names that would be most affected by this, but there could be a silver-lining here: market access issues could become a potential catalyst for merger and acquisition activity.

24/7 Wall St. has already addressed that the MLP sector is facing lower distributions, either lower payouts or suspended payouts. Another risk is that most of the closed-end funds tracking the MLP sector have already shown their net asset values as of the end of July. The risk is that these valuations are merely traps now, because the August performance of many key MLPs and other outfits in the sector have continued to drift lower with the market.

ClearBridge American Energy MLP Fund Inc. (NYSE: CBA) has many of the same MLPs inside its closed-end fund structure as the Kayne Anderson funds. After a 3.2% gain to $12.73 in Wednesday afternoon trading, its 52-week range is $11.48 to $19.43. The ClearBridge fund had $874.2 million in net assets at the end of July, but more recently it has announced a $75 million private placement of fixed-rate mandatory redeemable preferred stock on August 7, 2015.

24/7 Wall St. was able to get an industry insider’s view on the MLP sector as well. Many portfolio managers are of course going to talk up their books or present the best case, but at the end of the day investors should always consider what industry experts have to say. After all, industry insiders often know their sector better than anyone looking from outside of the fishbowl.

Jay Hatfield, Co-founder and president of InfraCap and portfolio manager of InfraCap MLP ETF (NYSEMKT: AMZA), told us on Wednesday:

The large cap MLPs still have easy access to capital as most of the companies are investment grade or strong ‘BB’ type credits, so can issue debt in the 4% to 7% range, depending on exact credit rating. In addition, the large cap companies stock/unit prices are depressed, but are still liquid with ability to access incremental equity capital.

Goldman Sachs MLP Income Opportunities Fund (NYSE: GMZ), run by Goldman Sachs, recently was able to increase its dividend. That was by about 6%, and its distribution yield-equivalent is now listed as north of 8%. Its price was last seen up 7.2% at $14.55 on Wednesday afternoon, against a 52-week range of $13.24 to $22.30.

Funds have been able to hold their heads above water despite many of the woes of the weaker MLPs. The moves higher so far seem to be oversold bounces. With higher interest rates still coming ahead, and with the price of oil still at risk, the rest of the story may simply be up to the directional price of oil.