Devon sold 69 million new shares in mid-February at $18.75 per share. The company also cut its dividend from an annual payout of $1.00 to $0.24 and said it would reduce its workforce by about 20% in the first quarter of 2016. Although shareholders didn’t like the sound of all that at the time, shares closed at $24.79 on Monday, not even a month after the announcement.

Whiting said it will suspend all hydraulic fracturing (fracking) and spend about $440 million of its 2016 capex to shut down its drilling and completion operations beginning in the second quarter. The company expects to close the year with 73 drilled, uncompleted wells in the Bakken shale play and 95 drilled, uncompleted wells in the Niobrara shale play.

Energen, like Devon, sold more than 18 million new shares to raise about $381 million in February. The company last week also hedged an additional 5.2 million barrels of 2016 production at an average price of $41.47 per barrel. Energen has now hedged about half (6.3 million barrels) its expected production midpoint estimate for 2016 at an average price of $45.33 per barrel. That’s nearly $9 a barrel higher than the current price.

Oasis figures it can get by in 2016 if oil sticks around $35 a barrel. The company projected cash flow from adjusted EBITDA less cash interest will cover its $200 million in drilling and completion capex. Oasis has hedged about 71% of its production hedged at $51 per barrel.

The following chart was included in a tweet from research firm Wood Mackenzie. It shows the decline in projected 2016 upstream capex compared to 2015 totals. The numbers are slightly different from Nomura’s, but the graphical presentation dramatizes what’s happening. 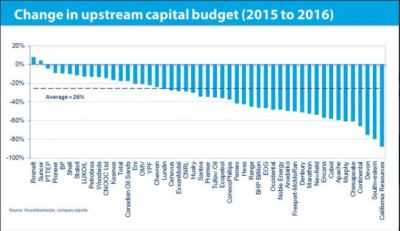