Why Chevron Let Anadarko Get Away

Anadarko is expected to terminate its previously approved deal with Chevron and accept the Occidental offer. Oxy had pushed its cash and stock offer to $38 billion, of which 78% ($59 per Anadarko share) was cash. Chevron’s first — and as it turns out, final — offer totaled about $33 billion, of which just 25% ($16.25 per share) was cash. Both offers included the assumption of Anadarko’s debt, raising the total enterprise value of Oxy’s deal to about $57 billion.

Winning in any environment doesn’t mean winning at any cost. Cost and capital discipline always matter, and we will not dilute our returns or erode value for our shareholders for the sake of doing a deal. Our advantaged portfolio is driving robust production and cash flow growth, higher investment returns and lower execution risk.

He may have a point. Forbes contributor Robert Rapier mentioned earlier this week that energy research firm Rystad Energy “recently noted that Anadarko’s Permian wells produce less oil and gas per-foot drilled than either Chevron or Occidental.” That’s a big deal because it raises the production costs, raises the break-even price and lowers the per-barrel margin.

Thursday morning, Rystad posted a chart showing the average weighted break-even price for a barrel of Brent-equivalent crude. In the firm’s chart, reprinted here, the average break-even price for a barrel of shale crude (labeled “NA tight liquids) is $46, lower than any other region except the Middle East. Currently producing wells have the lowest cost of all ($26 a barrel) and account for more than half of the 1.4 trillion recoverable barrels in the world. 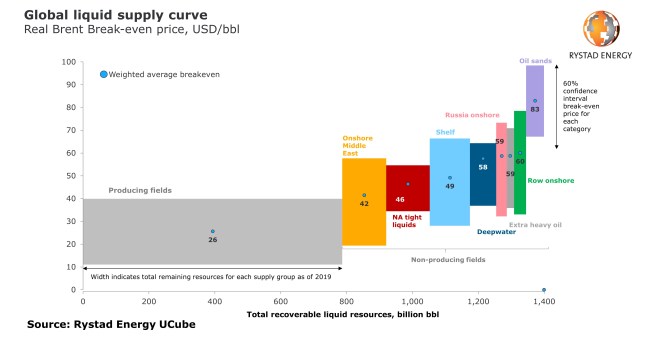 Chevron has just saved more than $8 billion in cash and added another billion from the breakup fee. Is it time for the company to go shopping again? Chevron is already the largest liquids producer in the Permian Basin, or, as CEO Wirth put it when he first announced the offer for Anadarko, “Trial and error may not be in our wheelhouse, but … technology and scale [are].”

The same could be said of any of the supermajor integrated oil companies. There are several likely acquisition targets for Chevron and the other supermajor energy companies: Exxon Mobil Corp. (NYSE: XOM), Royal Dutch Shell PLC (NYSE: RDS-A), Total S.A. (NYSE: TOT), Equinor ASA (NYSE: EQNR) and Eni SpA (NYSE: E). The only supermajor missing from this list is BP PLC (NYSE: BP), which paid $10.5 billion last year to pick up BHP Billiton’s U.S. onshore assets, so the British firm is likely not looking for another major deal.