When Apache Corp. (NYSE: APA) announced quarterly results in late October, the company said it was drilling its Maka Central #1 well and expected to reach a planned total depth of 6,325 meters (about 20,750 feet) below the deck of the drillship. On Monday morning, Apache reported that after reaching a depth of 6,200 meters, it had decided to drill to a new target depth of 6,900 meters (more than 22,000 feet).

This is not good news for Apache. Essentially what’s happened is that the company didn’t find what it expected. As a result, it will begin evaluating two possible plays in the Upper Cretaceous deposits and, once the testing is finished, Apache will case the hole, modify the rig and resume drilling sometime this month to evaluate a third possible play, this time in the deeper Cretaceous layer.

The Maka Central #1 well is located in Block 58 near the Suriname-Guyana border. Offshore Guyana has produced total recoverable resource estimates for Exxon Mobil of more than 6 billion barrels. The Suriname portion of the offshore basin has seen less exploration activity and, according to an August report from Reuters, no commercially viable discoveries have been found.

The following map, from oil and gas exploration and production company JHI Associates, shows the location of Block 58 in relation to the massive Exxon discoveries just to the northwest and marked in green on the map. 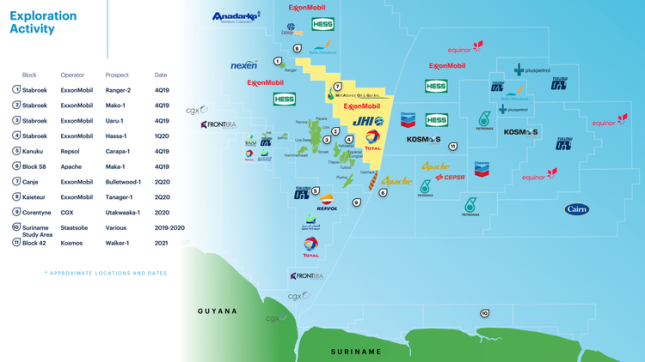 Following the company’s announcement, investors shaved nearly 12% off Apache stock in the first hour of trading Monday. With a forward price-earnings ratio of more than 491, perhaps a haircut was in order, even though the company pays a dividend yield of around 4.5%. Apache’s revenue has fallen sequentially in each of the past four quarters, and the company’s net loss in the third quarter totaled $152 million, less than half the $356 million net second-quarter loss.

Did Pioneer Natural Resources Pay Too Much for Parsley Energy?

Why Baker Hughes Earnings Probably Couldn't Have Been Better