Can Saudi Arabia Stop the Slide in Crude Prices?

The meeting of the G20 developed economies that began in Buenos Aires Friday has plenty on its agenda, not least of which is what two of the world’s top three crude oil producers plan to do to stop the decline in oil prices that has lopped more than 20% off the price in just two months. Russian President Vladimir Putin and Saudi Arabian Crown Prince Mohammed bin Sultan are scheduled to meet on the sidelines of the G20 meeting to discuss their next steps that are likely to be announced at next week’s meeting in Vienna of OPEC and its partners, including Russia.

Ever since late 2015 when the Saudis persuaded the Russians to join an OPEC production cut in an effort to raise prices, the two countries have pretty much acted in concert when it comes to trying to get oil prices to a level high enough to fill their coffers while at the same time not so high that the price results in permanent demand destruction.

The Saudis were able once virtually to dictate what the price of oil would be, but those days are long gone. They began to disappear for good earlier in this decade with the rise of U.S. production thanks to horizontal drilling and hydraulic fracturing (fracking). The United States is now the world’s largest producer of liquid hydrocarbons (oil, condensates, natural gas liquids), with Russia moving into second place and the Saudis a close third.

The following chart from a series by Reuters analyst John Kemp showing production from each of the three titans over the past four years tells the tale. 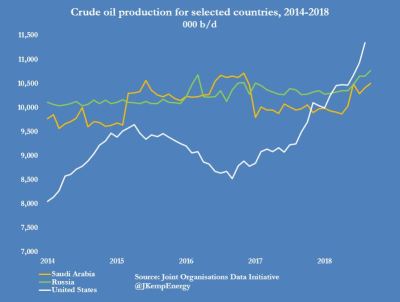 Compared to production levels in 2014, Saudi Arabia’s production in August 2018 was up by 630,000 barrels per day and Russia’s output had risen by 525,000 barrels a day. U.S. output soared by more than 2.6 million barrels a day. By choosing in 2015 to cut production and raise prices, the Saudis and the Russians succeeded mostly in reinvigorating the U.S. shale plays where low prices had cut exploration and production.

Only when the side effects of low prices (primarily lower capex) had worn off and U.S. producers began investing in more drilling again did the Saudis come to understand the nature of the beast they had created. As Kemp points out, former Saudi oil minister Ali al-Naimi, predicted just this outcome and lost his job because of it.

Any agreement made between Saudi Arabia and Russia almost certainly will be more costly to the Saudis than to the Russians, who have already indicated that they would be happy with a $60 price on Brent. The Saudis cannot live with such a low price, so they will be forced to take the lion’s share of the pain that comes with lower production. Russian producers likely will make a modest cut to production — just enough to avoid being called a meaningless gesture — and U.S. producers will get back to work producing more oil and undercutting Saudi efforts to raise prices by choking off supply.

It is also worth noting that President Trump’s tweets to get the Saudis to allow prices fall had no significant impact because the Saudis no longer control the crude market as they did in the 1970s. The president’s subsequent refusal to condemn the Saudis for the murder of American journalist Jamal Khashoggi and later offer of thanks to the Saudis for lowering oil prices was both an unwarranted and disgusting gift to a repressive regime. Saudi Arabia no longer punches above its weight because of its oil reserves and may no longer punch equal to its weight with anyone but the U.S. president.