U.S. gasoline prices have been creeping higher since reaching a low of $2.24 a gallon in the first week of January and currently are sitting at around $2.49 a gallon. There is more than one reason for the rise, but rising crude oil prices play the largest role. And, for the most part, the price of gasoline follows the same trajectory all around the world.

And when it comes to the world’s cheapest gasoline, there are not a lot of surprises either. Countries that enjoy large reserves of crude oil also enjoy low pump prices for gasoline. The United States, soon to become a net exporter of oil and petroleum products and already one of the world’s three largest crude producers along with Russia and Saudi Arabia, ranks 30th from the bottom out of 110 countries, right behind Ethiopia and just ahead of Belarus.

The following chart from Leasing Options shows the price of filling up with 50 liters (13.21 gallons) of gasoline in the 30 most expensive countries in the world based on data from GlobalPetrolPrices.com. 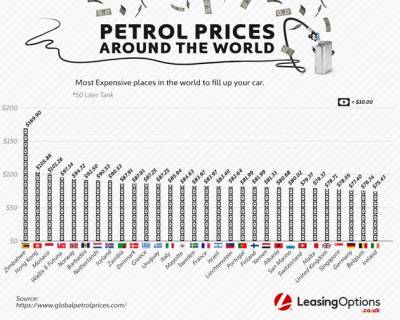 The country with the most expensive gasoline in the world is Zimbabwe, where a gallon of gas costs $12.64, more than 50% higher than the next highest priced place. The Zimbabwean dollar is virtually worthless and the U.S. dollar has been legal currency in the country since 2009. The country has no oil reserves and must import every drop of gasoline it uses in a currency it doesn’t control. A worse situation can hardly be imagined and is exacerbated by an estimated 2017 GDP per capita of $2,300 (U.S. GDP per capita in the same year was more than $59,500).

Here are nine other global locations where gasoline is the most expensive. The global average price per gallon is $4.17. This data also comes from GlobalPetrolPrices.com, but are current as of Monday so the per-gallon prices are slightly different from the Leasing Options data.

Hong Kong, $8.09 per gallon
A Special Administrative Region (SAR) of China, Hong Kong is the world’s eighth-most expensive place to live according to CEOWorld’s 2019 ranking.

Monaco, $7.49 a gallon
A principality along France’s Mediterranean coast sported an estimated GDP per capita of $115,700 based on the twin pillars of tourism and banking.

Wallis and Futuna, $7.17 a gallon
A French “overseas collectivity” just west of American Samoa in the South Pacific, and, like many other high-priced countries, all petroleum products have to be imported into a location with less than 16,000 inhabitants.

Norway, $7.08 a gallon
One of the world’s largest oil producers, Norway’s high cost for gasoline reflects the country’s drive to eliminate fossil-fuel burning and its high cost of living, the world’s third-highest.

The Netherlands, $6.82 a gallon
Rotterdam is the principal European port for shipping oil and petroleum products in and out of Europe, which would seem to support low prices, but gasoline taxes are Europe’s second-highest at $3.35 a gallon.

Iceland, $6.80 a gallon
The world’s second-most expensive country to live in, Iceland imports all its petroleum products. Gasoline taxes amount to about $2.26 a gallon compared to just $0.184 in the United States.

Barbados, $6.73 a gallon
The Caribbean nation has a small amount of crude reserves (2.5 million barrels) but no refining capacity. It is one of the wealthiest and best-developed countries in the region with an estimated GDP per capita of $18,600.

Greece, $6.64 a gallon
Gasoline taxes amount to $2.93 a gallon in Greece and the country is a net exporter of refined products. Gas prices are high because it imports more than 480,000 barrels a day of crude oil.

Italy, $6.55 a gallon
Like Greece, Italy is a net exporter of refined products and is also a net exporter of crude oil, but taxes amount to $3.18 a gallon, fourth highest among the world’s developed countries.

No list of high gasoline prices would be complete without a list of countries where prices are lowest. Once glance at this list and the reason for the low prices in most cases should be instantly apparent.