Global Clean Energy Investment Down 14% in First Half of 2019

A 39% drop in Chinese investments in renewable energy sent global investment in new projects down by 14% to $117.6 billion in the first half of 2019. That’s the lowest investment level since the second half of 2013. Total investment in the United States and in Europe also dropped by 6% and 4%, respectively.

The data was reported Wednesday by BloombergNEF, which noted that the sharp decline in Chinese spending followed a government decision to shift from mandated tariffs to an auction system for electricity from new solar and wind capacity. China’s first-half investment in clean energy dropped from around $47 billion in the second half of 2018 to $28.8 billion, its lowest level since 2013.

Justin Wu, head of Asia-Pacific for BNEF, commented: “The slowdown in investment in China is real, but the figures for first-half 2019 probably overstate its severity. We expect a nationwide solar auction happening now to lead to a rush of new PV [photovoltaic] project financings. We could also see several big deals in offshore wind in the second half.”

The following chart indicates investment levels by region and by six-month periods for the past 15 years. 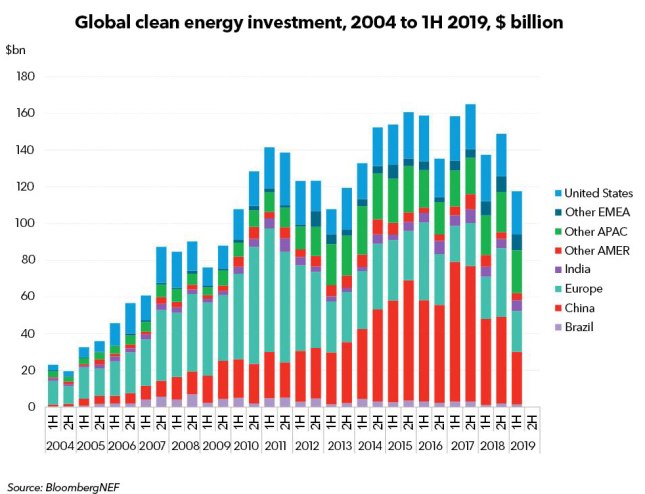 Not all the first-half 2019 news was bad, however. Dubai secured $4.2 billion in financing for a 950 megawatt (MW) solar project, the largest financing package ever in the solar energy sector. Two Taiwanese offshore wind projects with generating capacities of 640 MW and 900 MW secured an estimated combined investment of $5.7 billion.

When looking at the first-half investments by transaction type, BloombergNEF reported that $85.6 billion in investments went to utility-scale solar and wind projects, while smaller-scale projects attracted $23.7 billion. An $863 million secondary stock offering by Tesla and a $650 million convertible stock issue by Chinese electric vehicle maker Nio added about $1.4 billion to the first-half total of $5.6 billion in new investment by way of public markets. Venture capital and private equity funding dropped 4.7% in the first half to $4.7 billion, including $1 billion in funding to Sweden-based battery company Northvolt and U.S.-based electric vehicle charging company Lucid Motors.

Last month, BloombergNEF released is New Energy Outlook for 2019 that projected total investment in the world’s electrical grid of $13.3 trillion by 2050 to meet a demand increase of 62%.

The Most Destructive Wildfire In American History

This Is the Year Gas Prices Topped $4