Worldwide demand for electricity is expected to rise 62% by 2050 and global generating capacity will nearly triple to meet that increased demand. Over the next 30 years, the total investment in the world’s electrical grid is projected to rise to $13.3 trillion.

On a somewhat nearer-term timeline, by 2030, the energy generated or stored and dispatched by solar photovoltaic (PV) modules, wind turbines, and lithium-ion batteries will be lower almost everywhere in the world, according to the New Energy Outlook 2019 from BloombergNEF (BNEF). For every doubling of capacity in the use of these technologies, solar PV module prices will fall by 28%, wind turbine prices will fall by 14%, and battery costs will drop by 18%.

The better news, according to BNEF is that the projected growth of renewable energy sources shows that “many” nations can afford the cost of keeping rising global temperatures at 2 degrees Celsius or less without introducing more direct subsidies for technologies like solar PV or wind.

The chart, below, from BNEF shows the change in the fuels used to generate electricity. By 2050, coal’s share of global generation capacity will drop from its current level of 37% to 12% ,while oil-burning will virtually disappear. Wind and solar will rise from about 7% today to account for nearly 48% of power generation by 2050. In April, for the first time ever, electricity generation by green sources (wind, solar, hydro) surpassed the combined generation capacity of coal. 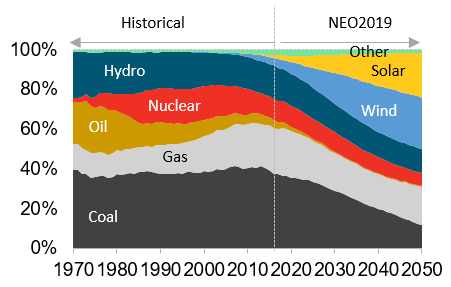 BNEF’s 2019 outlook for the first time considers the possibility that all road transportation and heating of residential buildings is electrified. Under such a scenario, electricity generation capacity needs to triple by 2050, resulting in the added benefit of avoiding 126 billion metric tons of greenhouse gas emissions over the next 30 years. According to the U.S. Environmental Protection Agency, U.S. greenhouse gas emissions totaled nearly 6.5 billion metric tons in 2017.

BNEF’s head of energy economics, Elena Giannakopoulou, said direct subsidies will not be necessary to meet this scenario, but that certain policy changes are a must: “[T]he reforming of power markets [will be needed] to ensure that] [wind, solar, and batteries are remunerated properly for their contributions to the grid. [The 2019 outlook] is fundamentally policy-agnostic, but it does assume that markets operate rationally and fairly to allow [the] lowest-cost providers to win.”

The big leap forward in renewable generation is due to improvements in batteries, the one thing that will enable a “number” of countries to generate 80% of all electricity from wind and solar. To get beyond that percentage, however, requires nuclear generation, biogas-to-power, green hydrogen-to-power, and carbon capture and storage technologies, among others.

Seb Henbest, director of BNEF’s outlook, explained that governments need to do two things: “[O]ne is to ensure their markets are friendly to the expansion of low-cost wind, solar and batteries; and the other is to back research and early deployment of these other technologies so that they can be harnessed at scale from the 2030s onwards.”

ALSO READ: 15 Great Dividend Stocks Retirees Should Own in 2019
Get Our Free Investment Newsletter