The price of West Texas Intermediate crude oil dropped to $23.22 Thursday morning, down more than 4% since last night’s close. Traders are clearly responding to the lack of support the industry received in the $2.2 trillion relief package the U.S. Senate has approved and that the House is expected to approve later today.

The White House and the oil companies were hoping that the relief package would include funding to buy crude to fill up the country’s Strategic Petroleum Reserve (SPR). None appeared.

The president had ordered the Department of Energy to purchase barrels to top up the reserve, but it wouldn’t have helped much. The Reserve’s capacity is 713.5 million barrels and there are 635 million barrels already in storage. Adding fewer than 80 million barrels to the SPR amounts to less than a week of current U.S. production of about 13 million barrels a day. To fill the SPR was expected to cost in the neighborhood of $3 billion, and that was before prices touched $20 a barrel.

Many U.S. shale producers cannot make a profit from existing wells at current crude prices. Worse, none is likely to make a profit on new wells that have not yet paid back their drilling and completion costs.

The Dallas Federal Reserve on Wednesday released its quarterly report on the state of the oil market in the 11th Federal Reserve district. The following charts provide responses from the bank’s survey of companies regarding their breakeven costs for operating and new wells. The colored bars represent a range and the black line indicates the median. The first chart shows the breakeven price for operating wells. The average range is $23 to $36 a barrel. 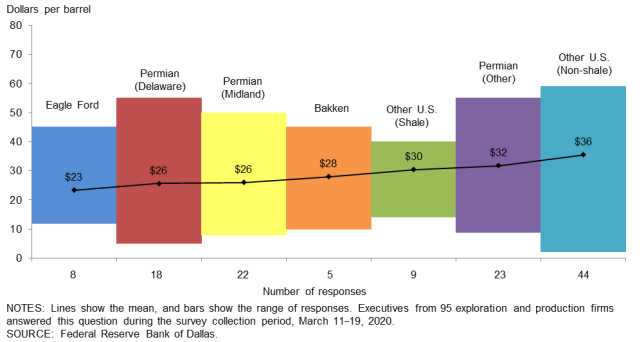 The second chart shows the price needed to breakeven on a new well. The average breakeven price for oil from a new well is $49 a barrel. 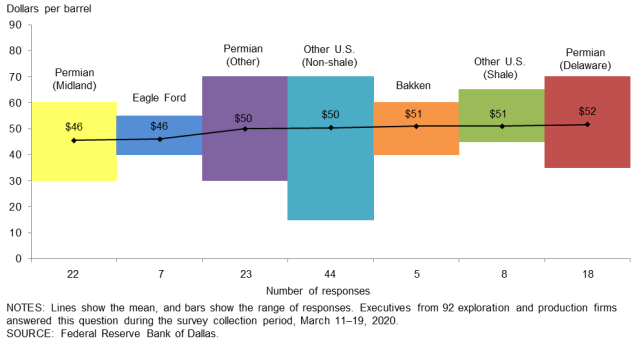 Demand for jet fuel has dropped by 6 million barrels a day to just 1.3 million as airlines cancel flights. Gasoline demand is down by half in Europe and by more than a third in the United States. India instituted a national lockdown on Tuesday that will result in even less demand.

Hardy told Bloomberg TV that the only way to handle the glut of crude was for refiners to cut throughput rates and for producers to stop pumping. The situation gets worse when storage tanks are full. Hardy suggested an immediate drop of 10 million barrels a day in current production.

The leaders of the G20, the world’s 20 biggest economies, are meeting by teleconference Thursday, and the U.S. president is expected to press Saudi Arabia to cut its production in an effort to lift prices. The irony of that, of course, is that less than a year ago Trump was chastising the Saudis for keeping oil prices high.

In any event, it is unlikely the Saudis will be willing to call off a price war that just started. They know Trump has little leverage over Russia, and the Saudis won’t stop producing unless the Russians do, another unlikely event in the near term.

Both the Russians and the Saudis have said they can breakeven at prices below $15 or even $10 a barrel. If neither can sell it because there’s no place to store it, well, it’s then worthless. That is the last thing that Russia or Saudi Arabia wants to have happen.

24/7 Wall St.
The Smartest Way to Play the Energy Collapse Is Mega-Cap Integrated Stocks
Get Our Free Investment Newsletter