The International Energy Agency (IEA) issued its 2020 World Energy Outlook (WEO) Tuesday. It outlines the changes people can expect to see over the next 10 years in the global demand for energy and which fuels will meet those demands. Demand for energy over the next decade depends on how quickly the COVID-19 pandemic is controlled and how quickly energy policy accelerates a transition away from fossil fuels.

The WEO offers two scenarios: a stated policies scenario that assumes current energy policies, along with control of the coronavirus pandemic in 2021, and a delayed recovery scenario, in which the same energy policies lead to different outcomes as the effects of the pandemic cause “deeper and longer lasting economic and social impacts.”

The following chart from the WEO shows the energy demand outlook by fuel type in 2030. The blue bars indicate the percentage gain or loss of demand under the stated policies scenario and the orange bars indicate gains and losses under the delayed response scenario. 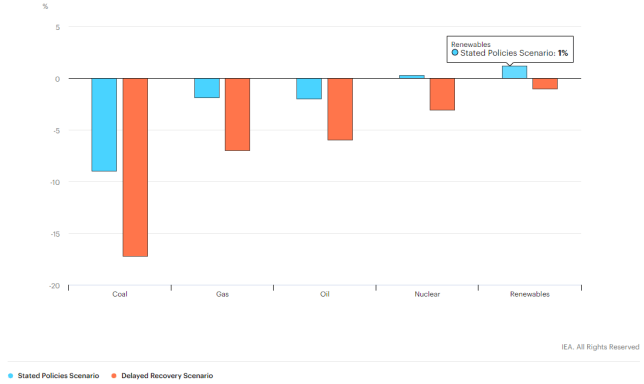 Demand growth for renewable energy, while only a modest 1% by 2030 under the first scenario, is the only fuel source to post a gain over the current decade. Demand for nuclear energy is expected to remain flat in the stated policies scenario. In the delayed response scenario, demand growth remains below pre-crisis levels for all fuels.

Dr. Fatih Birol, IEA’s managing director, commented: “I see solar becoming the new king of the world’s electricity markets. Based on today’s policy settings, it is on track to set new records for deployment every year after 2022.”

Here’s how the IEA sees oil demand growth out through 2040: 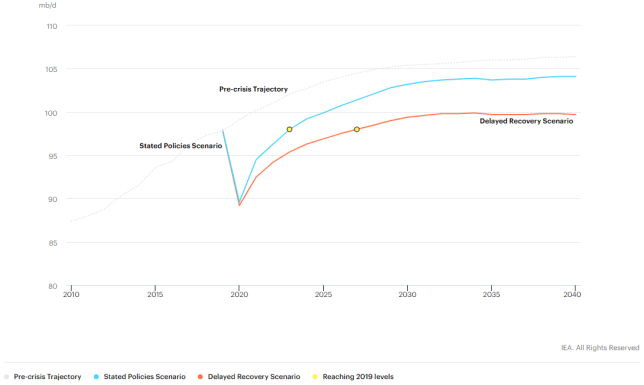 While global carbon emissions “do not deliver a decisive break” in a gradual trend higher, the second (delayed recovery) scenario flattens out at around 33 billion metric tons, a level the IEA expects to see in 2024. The bad news is that the decline is due almost entirely to reduced economic activity.

The Most Destructive Wildfire In American History

This Is the Year Gas Prices Topped $4