The first endorsement is from Morgan Stanley. The firm started coverage of GW Pharma as Overweight, but the $103 price target implied upside of more than 100% from the $46.04 closing bell price on Monday. It is not normal for a firm such as Morgan Stanley to say that a speculative stock can more than double.

The second such endorsement came from Jim Cramer on his morning notes on CNBC. He touted the stock as his pick around the legalized or medical marijuana there, but different from the other medical marijuana stocks. Also, please understand that Jim Cramer has touted this stock previously, so it should not be considered a “new Cramer stock pick” by any means.

The volume spike is massive on Tuesday, because the highest stock price target from any other analyst was $97, prior to the $103 price target delegated by Morgan Stanley.

GW Pharmaceuticals is a biopharma stock involved in discovering, developing and commercializing cannabinoid prescription medicines. It is based in the United Kingdom, with operations in Europe, the United States, Canada and Asia.

The company’s revenue was $44.2 million (converted) for its year-end in September 2013. Shares were up about 15%, but after the Cramer tout its stock is now up 32% at $61.30 on almost 3 million shares traded in less than an hour of trading on Tuesday. To put this in perspective of a serious volume spike, the average volume is barely 400,000 shares per day.

Even after the huge pop, GW Pharma’s market cap is barely $900 million. An image of the company’s drug pipeline has been included here, which shows the partnered programs and independent programs. 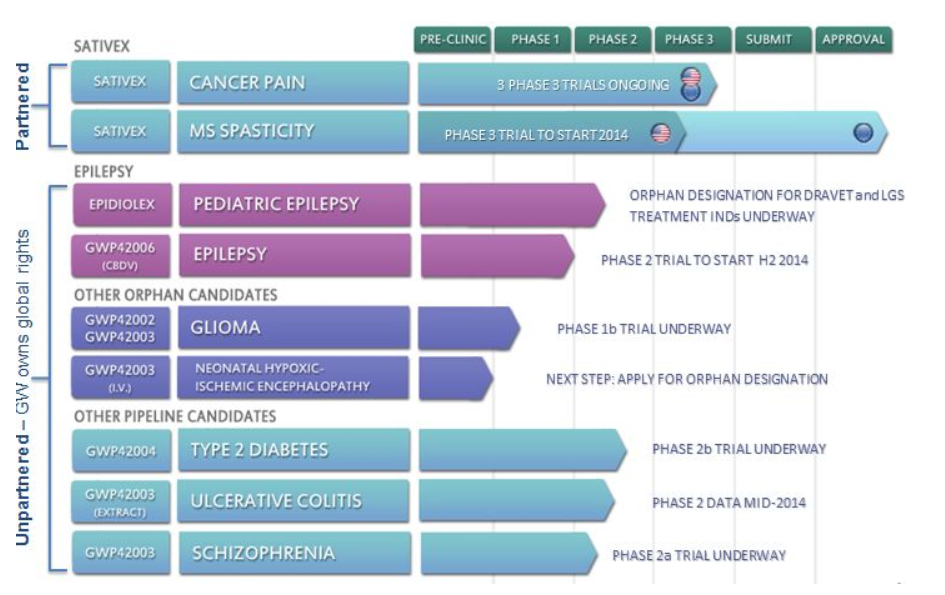