The number of uninsured Americans reached 13.7% in the fourth quarter of last year, the highest rate since 2014. The rate also rose from 10.9% in 2016, and that increase represents about 7 million Americans.

The level reached 18.0% in 2012, according to a new research study by Gallup. The implementation of the Affordable Care Act’s individual health insurance mandate in 2014 drove that down to the 2016 level. But the effects of the legislation are no longer favorable.

The Gallup data are based on the question, “Do you have health insurance coverage?” Sample sizes of randomly selected adults in 2018 were around 28,000 per quarter.

The ACA marketplace exchanges opened on Oct. 1, 2013, and most new insurance plans purchased during the last quarter of that year began their coverage on Jan. 1, 2014. Medicaid expansion among 24 states (and the District of Columbia) also began at the beginning of 2014, with 12 more states expanding Medicaid since that time. Expanded Medicaid coverage as a part of the ACA broadens the number of low-income Americans who qualify for it to those earning up to 138% of the federal poverty level. The onset of these two major mechanisms of the ACA at the beginning of 2014 makes the uninsured rate in the third quarter of 2013 the natural benchmark for comparison to measure the effects of that policy.

Gallup gave several possible reasons for the change. These included in specific: 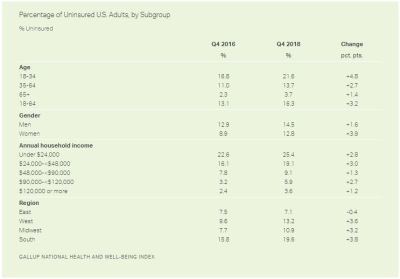