The National Association of Realtors (NAR) Thursday morning released its data on pending sales of existing homes for the month of April. The pending home sales index dropped by 1.5% from a March reading of 105.9 to an April reading of 104.3. The index has declined year over year for 16 consecutive months and was down 2% compared with April 2018.

The consensus estimate called for pending sales to rise by 0.5% month over month. The index reflects signed contracts, not sales closings. An index reading of 100 equals the average level of contract signings during 2001.

With the spring buying season now fully upon us, the April report on pending sales does not add much positive momentum in the housing market going into the summer. Actual sales of existing homes, reported last week by the NAR, were down 0.4% to a seasonally adjusted annual rate of 5.19 million from a total of 5.21 million in March. Sales remain down 4.4% compared to April 2018 sales of 5.43 million.

Though the latest monthly figure shows a mild decline in contract signings, mortgage applications and consumer confidence have been steadily rising. It’s inevitable for sales to turn higher in a few months.

Yun also noted that the inventory of homes available for sale at less than $250,000 stood at 3.3 months in April, compared with 8.9 months of supply for homes priced at $1 million or more. In a balanced market, six months of supply is considered to benefit buyers and sellers equally.

Even though we’re in homebuying season, home sales have been falling, while home prices are up almost 4% year-over-year. If you’re shopping in the less-expensive half of your local market, have patience and grit. … If you’re selling a starter home, you’re in a strong position to generate lots of interest from buyers. But if you’re selling a home in the upper half of your market’s price range, make sure you price it correctly to avoid having your home become stale by sitting on the market.

The following graphic indicates April pending sales by geographical regions. Only in the South are pending sales showing a high level of activity. 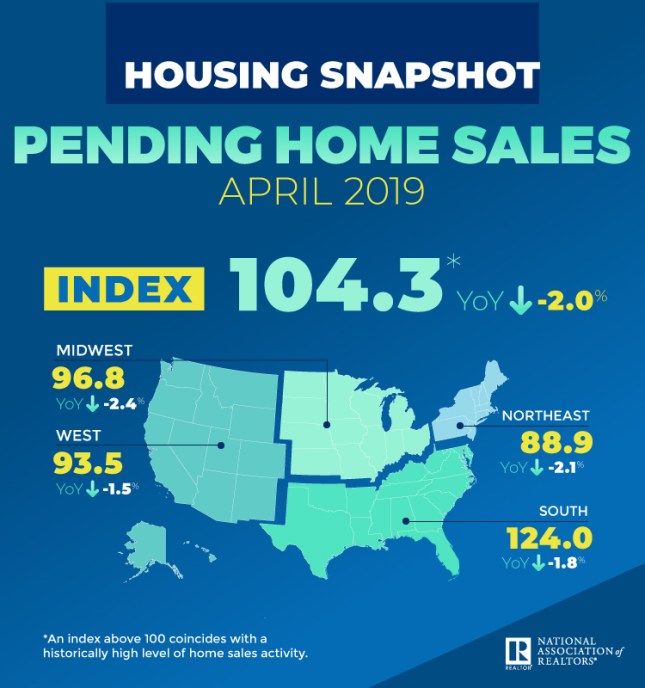