GE Is Actually Coming Back in Favor Again

Source: Wikimedia Commons
General Electric Co. (NYSE: GE) saw some serious selling pressure after its second-quarter earnings report. Things just were not going its way. The company’s Synchrony Financial (NYSE: SYF) initial public offering was not exactly a stellar one at the start. Then came word that GE was looking yet again to unload its appliances unit. And analysis of GE’s stock chart was giving a serious concern not seen in the past two or three years.

Suddenly, it seems that GE is finding friends again on Wall Street. There is still a concern if you review the chart (see end of story), but analysts are starting to become favorable again. Recent reports were seen by Credit Suisse, another in a Barron’s interview, then by Bernstein, Morningstar and Argus.

Credit Suisse reinstated a rating of Outperform on General Electric with a price target of $30. General Electric’s industrial earnings comprise 70% of its total earnings and have been growing at 10% to 11% annually. The firm pointed out that GE is out of favor with institutional investors and also that it has lagged year to date for investors. The firm is looking for GE to have industrial margin expansion accelerating in 2015.

Nick Heymann, an analyst with William Blair, said in a Barron’s interview on the weekend of August 8 that he suspects that industrial earnings will outgrow the financial earnings for the first time in 13 years. GE is looking to set up its power business as its leader for earnings for the next few years. William Blair set a 12-month price target at $30, which looks for a gain of around 20% with a large upside should things go as planned for GE.

Bernstein reported that GE’s recent portfolio will be more focused on industrial earnings than it has been in nearly 25 years. This could potentially push the price over $30. The firm upgraded GE to Outperform from Market Perform on August 6 with a $33 price target. GE’s deal with Alstom to buy its power assets comes on the heels of GE announcing that it will split off its consumer credit card business, which will ultimately cut $1 billion out of annual overhead.

Morningstar said on July 30 that GE’s Synchrony IPO was deeply undervalued — maybe nearly at a 50% discount to its true value. Morningstar’s Dan Werner noted that there was a strong incentive for the private label credit card operation spin-off to go off at an attractive price. The move would be to maximize the value of the asset for the 85% remaining stake held by GE. Also, the complete separation will not be completed until the end of 2015. Here was what really stood out in Morningstar’s note: Synchrony was said to be worth as much as $36 per share, based only on 10.3 times expected 2015 earnings. With a $23 IPO price, and roughly the same price currently, that sounds like serious upside if they are correct.

After earnings in July, Argus reiterated its Buy rating and $31 price target based on attractive valuations. A report just in the past week from S&P Capital IQ maintained a Buy rating around the notion of selling its appliance unit.

The story of GE tomorrow is not just the story of yesterday’s and today’s GE. It is three moving parts. First is the Alstom acquisition. The second is that GE’s spin-off of Synchrony should aim to get the conglomerate valued like an industrial conglomerate rather than a conglomerate that is also part bank. Lastly, the upcoming (make that hopeful) exit of GE Appliances has been confirmed as being in talks by both Bloomberg and by CNBC. This is Jeff Immelt’s second time around on potentially jettisoning that unit — with the Great Recession getting in the way of it last time.

GE’s 200-day moving average was clearly violated in July, and that has not yet been rectified. Still, analysts are starting to decide that perhaps GE’s stock has been sold off too much. GE shares were up over 1% at $25.90 on Monday morning, after having challenged the $25 mark at the start of August. But that is still considerably lower than its 52-week high of $28.09 and lower than its consensus analyst price target of $29.75. GE’s valuation is currently at just over 14 times expected 2015 earnings, but that is as of today and not necessarily considering the three major changes going on in the transition period.

As you can see in the GE chart from Stockcharts.com below, the chart issue has improved but has not yet gone away. 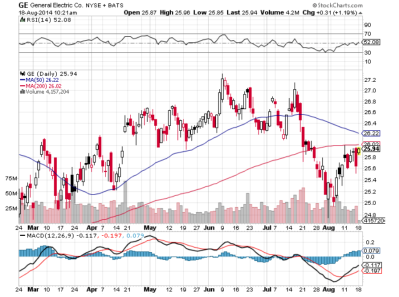