Another issue to consider here is that GE’s effort has been to maintain that 2016 would be a back-end loaded success for the year. CEO Jeff Immelt has not been that vocal of late, but here is what he said in July:

Investors are seeing the benefits of our portfolio transformation. The GE Capital exit plan enabled GE Capital to return $15 billion in dividends year to date, and our de-designation as a systemically important financial institution gives us more balance sheet flexibility. We will continue to invest in key growth initiatives such as GE Digital, while returning ~$26 billion to investors through buyback and dividends.

The diversity and scale of our portfolio enabled the company to perform well despite a volatile and slow growth economy. We delivered $0.51 of earnings per share with strong execution in Power, Aviation and Healthcare that offset challenging environments in Oil & Gas and Transportation. We expect strong organic growth in the second half of the year and reaffirm our 2016 operating framework.

One issue which might matter now is that GE has been a mega-buyer of its own stock. GE’s cash and marketable securities totaled $91.8 billion at the end of the June quarter, versus $102.5 billion at the end of June in 2015. GE said in July that its total return of capital to shareholders was about $18 billion, with roughly $13.7 billion of that from the share buyback plan.

What investors need to take under consideration is that the prior talk has been for GE to hit $2.00 in earnings per share in 2018. That is now no longer considered as gospel by analysts (with the $1.95 EPS target now). It is also dangerous for companies to offer too much specific guidance that far out.

Part of the long-term guidance and estimates is based in part on a lower share count, with GE retiring shares as it buys them down. The 10 billion shares of 2015 are projected by analysts to fall as follows (at year-end):

If you want to go back and see what makes GE so hard to analyze, it is that GE has been in a serious state of change. On top of recent small acquisition, GE had two big cautious analyst reports in July after earnings. On top of GE now facing lower financial regulations after losing its SIFI/TBTF designation, GE has also been selling non-core units.

GE is perhaps one of the most important companies that guide the overall economy. Its market cap of $261 billion makes it the tenth largest U.S. company, but it is actively involved in so many areas of the economy that investors have to pay attention to GE’s earnings whether they want to or not.

As a reminder, being set up for a surprise is not always a positive surprise. GE has many moving parts to it and it is rather hard for analysts and investors to get their calls right. When the bets get lined up too much on one side or another, it creates an opportunity for contrarians to come in before or after the news is out.

One last consideration here is GE’s chart. As you will see, GE would face a lot of implied share price resistance as it gets closer to $30. Its 200-day moving average is just under $30 and its 50-day is just above $30 (see the StockCharts.com chart below). 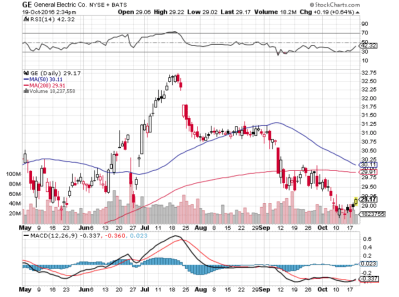 Can Sigma Labs Bring 3D Printing Back to Life?